The stoat or short-tailed weasel (Mustela erminea), also known as the ermine, is a mustelid native to Eurasia and North America. Because of its wide circumpolar distribution, it is listed as Least Concern on the IUCN Red List.

The name ermine /ˈɜːrmɪn/ is used for species in the genus Mustela, especially the stoat, in its pure white winter coat, or the fur thereof.

Introduced in the late 19th century into New Zealand to control rabbits, the stoat has had a devastating effect on native bird populations. It was nominated as one of the world's top 100 "worst invaders".

Ermine luxury fur was used in the 15th century by Catholic monarchs, who sometimes used it as the mozzetta cape. It was also used in capes on images such as the Infant Jesus of Prague. 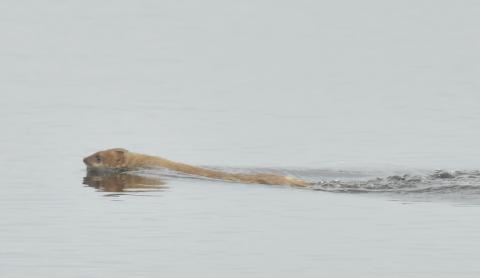 The root word for "stoat" is likely either the Dutch word stout ("bold") or the Gothic word 𐍃𐍄𐌰𐌿𐍄𐌰𐌽 (stautan, "to push"). According to John Guillim, in his Display of Heraldrie, the word "ermine" is likely derived from Armenia, the nation where it was thought the species originated, though other authors have linked it to the Norman French from the Teutonic harmin (Anglo-Saxon hearma). This seems to come from the Lithuanian word šarmu. In Ireland (where the least weasel does not occur), the stoat is referred to as a weasel, while in North America it is called a short-tailed weasel. A male stoat is called a dog, hob, or jack, while a female is called a jill. The collective noun for stoats is either gang or pack.

The stoat's direct ancestor was Mustela palerminea, a common carnivore in central and eastern Europe during the Middle Pleistocene, that spread to North America during the late Blancan or early Irvingtonian. The stoat is the product of a process that began 5–7 million years ago, when northern forests were replaced by open grassland, thus prompting an explosive evolution of small, burrowing rodents. The stoat's ancestors were larger than the current form, and underwent a reduction in size as they exploited the new food source. The stoat first arose in Eurasia, shortly after the long-tailed weasel arose as its mirror image in North America 2 million years ago. The stoat thrived during the Ice Age, as its small size and long body allowed it to easily operate beneath snow, as well as hunt in burrows. The stoat and the long-tailed weasel remained separated until 500,000 years ago, when falling sea levels exposed the Bering land bridge. 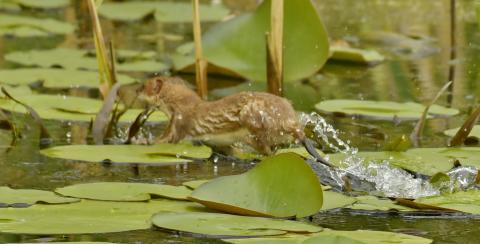