Fox is a common name for many species of alert omnivorous mammals belonging to the Canidae family. Foxes are small-to-medium-size canids (slightly smaller than a medium-size domestic dog), with a flattened skull, upright triangular ears, a pointed, slightly upturned snout, and a long bushy tail (or brush).

Members of about 37 species are referred to as foxes, of which only 12 species actually belong to the Vulpes genus of "true foxes". By far the most common and widespread species of fox is the red fox (Vulpes vulpes), although various species are found on almost every continent. The presence of fox-like carnivores all over the globe, together with their widespread reputation for cunning, has contributed to their appearance in popular culture and folklore in many societies around the world (see also Foxes in culture). The hunting of foxes with packs of hounds, long an established pursuit in Europe, especially the British Isles, was exported by European settlers to various parts of the New World. 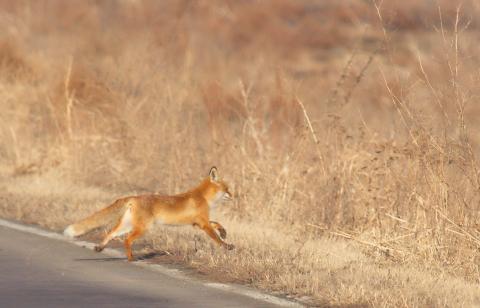 The word fox was inherited from Old English, itself from Proto-Germanic *fuhsaz; compare West Frisian foks, Dutch vos, and German Fuchs. This in turn derives from Proto-Indo-European *puḱ- ‘thick-haired; tail’, which also gave Hindi pū̃ch ‘tail’, Tocharian B päkā ‘tail; chowrie’, and Lithuanian paustìs ‘fur’. The bushy tail also forms the basis for the fox's Welsh name, llwynog, literally ‘bushy’, from llwyn ‘bush’. Likewise, Portuguese: raposa from rabo ‘tail’, Lithuanian uodẽgis from uodegà ‘tail’, and Ojibwa waagosh from waa, which refers to the up and down "bounce" or flickering of an animal or its tail.Male foxes are known as dogs, tods or reynards, females as vixens, and young as cubs, pups, or kits. A group of foxes is referred to as a skulk, leash, troop, or earth.

In the wild, foxes can live for up to 10 years, but most foxes only live for 2 to 3 years due to hunting, road accidents and diseases. Foxes are generally smaller than other members of the family Canidae such as wolves, jackals, and domestic dogs. Male foxes are called reynards, and weigh, on average, around 5.9 kilograms (13 lb) while female foxes, called vixens, weigh less, at around 5.2 kilograms (11.5 lb). Fox-like features typically include a distinctive muzzle (a "fox face") and bushy tail. Other physical characteristics vary according to habitat. For example, the fennec fox (and other species of fox adapted to life in the desert, such as the kit fox) has large ears and short fur, whereas the Arctic fox has tiny ears and thick, insulating fur. Another example is the red fox, which has a typical auburn pelt, the tail normally ending with white marking. Litter sizes can vary greatly according to species and environment – the Arctic fox, for example, has an average litter of four to five, with eleven as maximum.

Unlike many canids, foxes are not always pack animals. Typically, they live in small family groups, and are opportunistic feeders that hunt live prey (especially rodents). Using a pouncing technique practiced from an early age, they are usually able to kill their prey quickly. Foxes also gather a wide variety of other foods ranging from grasshoppers to fruit and berries. The gray fox is one of only two canine species known to climb trees; the other is the raccoon dog.

Foxes are normally extremely wary of humans and are not usually kept as indoor pets; however, the silver fox was successfully domesticated in Russia after a 45-year selective breeding program. This selective breeding also resulted in physical and behavioral traits appearing that are frequently seen in domestic cats, dogs, and other animals, such as pigmentation changes, floppy ears, and curly tails.

Canids commonly known as foxes include members of the following genera: