The Yellowhammer (Emberiza citrinella) is a passerine bird in the bunting family Emberizidae. It is common in all sorts of open areas with some scrub or trees and form small flocks in winter.

The Yellowhammer is a robust 15.5–17 cm long bird, with a thick seed-eater's bill. The male has a bright yellow head, yellow underparts, and a heavily streaked brown back. The female is much duller, and more streaked below. The familiar, if somewhat monotonous, song of the cock is often described as A little bit of bread and no cheese. 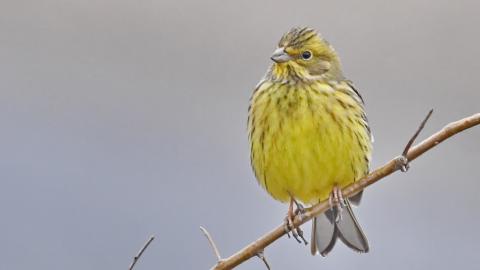 Its natural diet consists of insects when feeding young, and otherwise seeds. The nest is on the ground. 3-6 eggs are laid, which show the hair-like markings characteristic of those of buntings.

Beethoven admitted he got the idea for the first four notes of his 5th symphony from the yellowhammer's call. The bird prefaces the last, lower, note with 5 or more notes - instead of Beethoven's three - and occasionally sings the last note higher than the others.

It breeds across Europe and much of Asia. In parts of Europe it is in serious decline; in the UK the species fell by 54% between 1970 and 2003. In Europe and Asia most birds are resident, but some far northern birds migrate south in winter.

It is most commonly found on lowland arable and mixed farmland, probably due to the greater availability of seeds. It nests in hedges, patches of scrub, and ditches, especially if these have a wide grass margin next to them, and a cereal crop next to the margin. Hedges of up to two metres tall are preferred, and they will not nest until it is in full leaf, building the nest next to the hedge if it is built before this. In winter, the flocks feed at good seed sites, such as newly-sown fields and over-wintered stubbles. 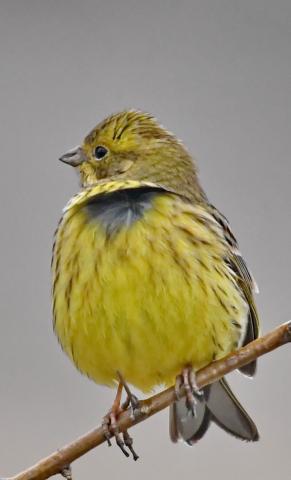 The Yellowhammer was introduced to New Zealand in 1862 and is now common and widespread there.

Invertebrates - mainly, but not exclusively - taken through the breeding season:

They are more able to feed on the slower-moving invertebrates.