The wood duck or Carolina duck (Aix sponsa) is a species of perching duck found in North America. It is one of the most colorful North American waterfowl. 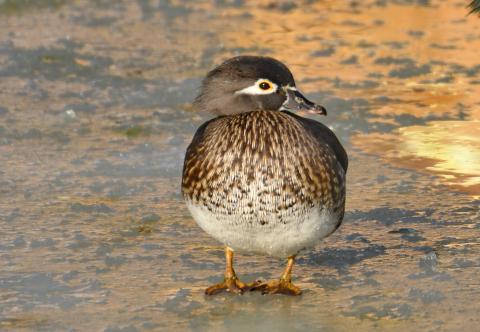 The wood duck is a medium-sized perching duck. A typical adult is from 47 to 54 cm (19 to 21 in) in length with a wingspan of between 66 to 73 cm (26 to 29 in). This is about three-quarters of the length of an adult mallard. It shares its genus with the Asian Mandarin duck (Aix galericulata).

The adult male has distinctive multicolored iridescent plumage and red eyes,with a distinctive white flare down the neck. The female, less colorful, has a white eye-ring and a whitish throat. Both adults have crested heads.

The male's call is a rising whistle, jeeeeee; the females utter a drawn-out, rising squeal, do weep do weep, when flushed, and a sharp cr-r-ek, cr-e-ek for an alarm call.

Their breeding habitat is wooded swamps, shallow lakes, marshes or ponds, and creeks in eastern North America, the west coast of the United States and western Mexico. They usually nest in cavities in trees close to water, although they will take advantage of nesting boxes in wetland locations. Females line their nests with feathers and other soft materials, and the elevation provides some protection from predators. Unlike most other ducks, the wood duck has sharp claws for perching in trees and can, in southern regions, produce two broods in a single season—the only North American duck that can do so.

Females typically lay between 7 and 15 white-tan eggs that incubate for an average of 30 days. However, if nesting boxes are placed too close together, females may lay eggs in the nests of their neighbours, which may lead to nests which may contain as many as 30 eggs and unsuccessful incubation, a behaviour known as "nest dumping".

After hatching, the ducklings climb to the opening of the nest cavity, jump down from the nest tree and make their way to water. The mother calls them to her, but does not help them in any way. They prefer nesting over water so the young have a soft landing, but will nest up to 140 m (460 ft) away from the shoreline. The day after they hatch, the young climb to the nest entrance and jump to the ground. The ducklings can swim and find their own food by this time."

These birds feed by dabbling or walking on land. Dabbling means to search for food from the surface of the water, as opposed to diving underneath the surface to scavenge for food. They mainly eat berries, acorns, and seeds, but also insects, making them omnivores.

The birds are year-round residents in parts of its southern range, but the northern populations migrate south for the winter. They overwinter in the southern United States near the Atlantic coast. 75% of the wood ducks in the Pacific Flyway are non-migratory. They are also popular, due to their attractive plumage, in waterfowl collections and as such are frequently recorded in Great Britain as escapes—populations have become temporarily established in Surrey in the past but are not considered to be self-sustaining in the fashion of the closely related Mandarin duck.[citation needed] Given its native distribution the species is also a potential natural vagrant to Western Europe and there have been records in areas such as Cornwall, Scotland and the Isles of Scilly which some observers consider may relate to wild birds; however, given the wood duck's popularity in captivity it would be extremely difficult to prove their provenance. There is a small feral population in Dublin.

The population of the wood duck was in serious decline in the late 19th century as a result of severe habitat loss and market hunting both for meat and plumage for the ladies' hat market in Europe. By the beginning of the 20th century, wood ducks had virtually disappeared from much of their former range. In response to the Migratory Bird Treaty established in 1916 and enactment of the U.S. Migratory Bird Treaty Act of 1918, wood duck populations began to recover slowly. By ending unregulated hunting and taking measures to protect remaining habitat, wood duck populations began to rebound in the 1920s. The development of the artificial nesting box in the 1930s gave an additional boost to wood duck production.

Landowners as well as park and refuge managers can encourage wood ducks by building wood duck nest boxes near lakes, ponds, and streams. Fulda, Minnesota has adopted the wood duck as an unofficial mascot, and a large number of nest boxes can be found in the area.

The population of the wood duck has increased a great deal in the last several years. The increase has been due to the work of many people constructing wood duck boxes and conserving vital habitat for the wood ducks to breed. During the open waterfowl season, U.S. hunters have only been allowed to take two wood ducks per day in the Atlantic and Mississippi Flyways. However, for the 2008–2009 season, the limit was raised to three. The wood duck limit remains at two in the Central Flyway and at seven in the Pacific Flyway. It is the second most commonly hunted duck in North America, after the mallard the wood duck is also known as the Aix sponsa. 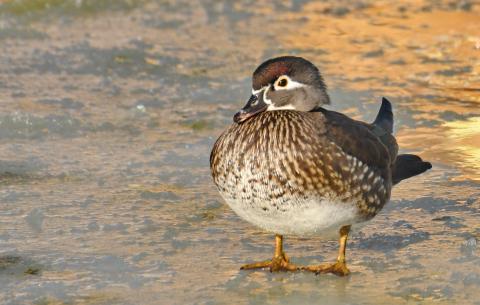