The western black-eared wheatear (Oenanthe hispanica) is a wheatear, a small migratory passerine bird that was formerly classed as a member of the thrush family Turdidae, but is now more generally considered to be an Old World flycatcher (family Muscicapidae).

The breeding male of the Iberian peninsula and North Africa has the forehead and crown white or nearly white, the mantle buff, and the wings blacker than those of the northern wheatear. The underparts are white tinged with buff. The back, upper tail coverts and most of the tail are white. The ear coverts and a line from the bill, and sometimes the throat, are black (sometimes referred to as dark morph). 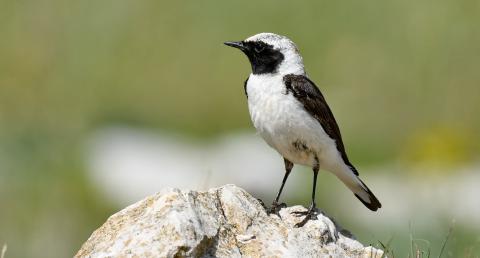 In autumn and winter the head and mantle are distinctly buff, as are the underparts, including the throat, but the buff varies in intensity. Except for the central pair, the tail feathers are much whiter than in the northern wheatear, the white on the inner web often extending to the tip.

The female is a browner bird, but has the characteristic lower back, and her seasonal changes are less marked.

The genus name Oenanthe is derived from the Ancient Greek oenos (οίνος) "wine" and anthos (ανθός) "flower". It refers to the northern wheatear's return to Greece in the spring just as the grapevines blossom. The specific hispanica is Latin for "Spanish". "Wheatear" is not derived from "wheat" or any sense of "ear", but is a 16th-century linguistic corruption of "white" and "arse", referring to the prominent white rump found in most species.