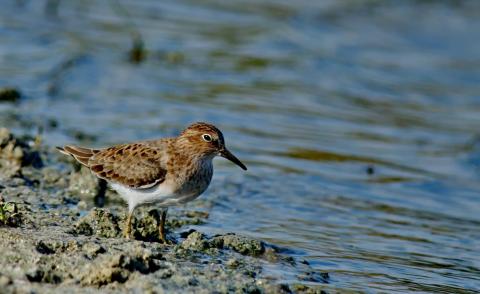 This stint's breeding habitat is bogs and marshes in the taiga of Arctic northern Europe and Asia. It will breed in southern Scandinavia and occasionally Scotland. It has a distinctive hovering display flight. It nests in a scrape on the ground, laying 3–4 eggs. Temminck's stint is strongly migratory, wintering at freshwater sites in tropical Africa, the Indian Subcontinent and parts of Southeast Asia.

These birds forage in soft mud with some vegetation, mainly picking up food by sight. They have a distinctive mouse-like feeding behaviour, creeping steadily along the edges of pools. They mostly eat insects and other small invertebrates. They not as gregarious as other Calidris waders, and rarely form large flocks.

This is a rather drab wader, with mainly plain brown upperparts and head, and underparts white apart from a darker breast. The breeding adult has some brighter rufous mantle feathers to relieve the generally still undistinguished appearance. In winter plumage, the general appearance recalls a tiny version of common sandpiper. The call is a loud trill.

Temminck's stints have an intriguing breeding and parental care system in which males and female parents incubate separate clutches, typically in different locations. Males establish small territories and mate with a female who lays a first clutch of eggs. She then moves to a second territory and mate, and lays a second clutch that she incubates herself. Concurrently, her first male may mate with an incoming second female, who lays her second clutch on his territory. The male thereafter incubates his first mate's first clutch alone.

Temminck's stint is one of the species to which the Agreement on the Conservation of African-Eurasian Migratory Waterbirds (AEWA) applies.

An apparent hybrid between this species and the little stint has been reported from the Netherlands.