The European stonechat (Saxicola rubicola) is a small passerine bird that was formerly classed as a subspecies of the common stonechat. Long considered a member of the thrush family, Turdidae, genetic evidence has placed it and its relatives in the Old World flycatcher family, Muscicapidae.

The two subspecies differ in colour intensity following Gloger's rule, with S. r. rubicola paler and with larger white patches in the drier European continental and mediterranean climates, and S. r. hibernans darker brown with less white in the humid Atlantic oceanic climate. They intergrade broadly where their ranges meet, from southeastern England south through France and Spain, and many individuals are not identifiable to subspecies. Extreme examples of S. r. rubicola from the driest southern areas of its range such as the Algarve and Sicily are particularly pale and with a large white rump, and can be very similar to Siberian stonechats in appearance. nDNA microsatellite fingerprinting reveals a very small degree of separation between the two subspecies

Together with the Siberian stonechat and Canary Islands stonechat it constitutes eastern and western representatives of a Eurasian lineage; the Asian and European populations separated during the Late Pliocene or Early Pleistocene, roughly 1.5-2.5 mya, and Fuerteventura was colonised by western European or northwest African birds somewhat later in the Early Pleistocene, about 1-2 mya.

The etymology of the English name derives from its call, sounding like two stones knocked together. The scientific name Saxicola means "rock-dweller", from Latin saxum, a rock + incola, dwelling in; and rubicola, "bramble-dweller", from Latin Rubus, brambles + incola; the subspecies name hibernans refers to Ireland (Latin, Hibernia).

The stonechat is 11.5–13 cm long and weighs 13–17 g, slightly smaller than the European robin. Both sexes have distinctively short wings, shorter than those of the more migratory whinchat and Siberian stonechat. The summer male has black upperparts, a black head, an orange throat and breast, and a white belly and vent. It also has a white half-collar on the sides of its neck, a small white scapular patch on the wings, and a very small white patch on the rump often streaked with black. The female has brown upperparts and head, and no white neck patches, rump or belly, these areas being streaked dark brown on paler brown, the only white being the scapular patch on the wings and even this often being buffy-white.

European stonechats breed in heathland, coastal dunes and rough grassland with scattered small shrubs and bramble, open gorse, tussocks or heather. They are short-distance migrants or non-migratory, with part of the population (particularly from northeastern parts of the range, where winters are colder) moving south to winter further south in Europe and more widely in north Africa.

The male's song is high and twittering like a dunnock. Both sexes have a clicking call like stones knocking together.

In 2015, John Callion published the results of his 25-year study of the bird in British Birds. 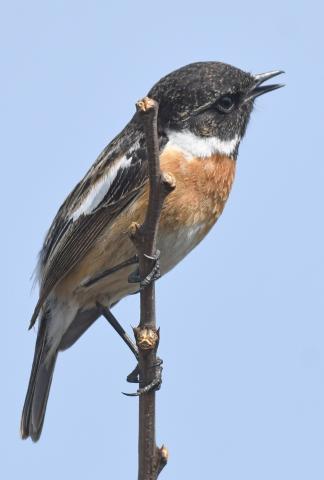 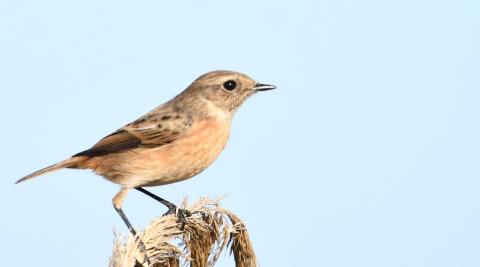