The Eurasian Spoonbill or Common Spoonbill (Platalea leucorodia) is a wading bird of the ibis and spoonbill family Threskiornithidae,

This is a Palearctic species, breeding from the United Kingdom and Spain in the west through to Japan, and also in North Africa. In Europe, only The Netherlands, Spain, Austria, Hungary and Greece have sizeable populations. Most birds migrate to the tropics in winter, with European breeders mainly going to Africa, but a few remaining in mild winter areas of western Europe south to the United Kingdom. It was extirpated from the United Kingdom but sporadic breeding attempts in the early 21st Century culminated with the formation of a colony at Holkham in Norfolk in 2010. In 2011, 8 breeding pairs nested, successfully fledging 14 young

This species is almost unmistakable in most of its range. The breeding bird is all white except for its dark legs, black bill with a yellow tip, and a yellow breast patch like a pelican. It has a crest in the breeding season. Non-breeders lack the crest and breast patch, and immature birds have a pale bill and black tips to the primary flight feathers. Unlike herons, spoonbills fly with their necks outstretched. 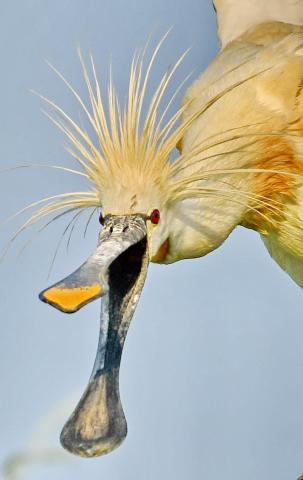 The Eurasian Spoonbill differs from the African Spoonbill with which in overlaps in winter, in that the latter species has a red face and legs, and no crest.

The diet consists of adult and larval aquatic insects, molluscs, crustaceans, worms, leeches, frogs, tadpoles and small fish up to 10-15 cm long. It may also take algae or small fragments of aquatic plants (although these are possibly ingested accidentally with animal matter).

More northerly breeding populations are fully migratory but may only migrate short distances while other, more southerly populations are resident and nomadic or partially migratory. In the Palearctic the species breeds in spring (e.g. from April) but in tropical parts of its range it times breeding to coincide with rainfall. Breeding is normally in single species colonies or in small single species groups amidst mixed-species colonies of other waterbirds such as herons, egrets and cormorants. Outside the breeding season Eurasian Spoonbills forage singly or in small flocks of up to 100 individuals. Migration is usally conducted in flocks of up to 100 individuals. Most activity takes place during the morning and evening (although in coastal areas it foraging is governed by tidal ryhthms), they often roost communally in roosts which are up to 15 km away from the feeding areas.

The nest is a platform of sticks and vegetation which is either constructed on the ground on islands in lakes and rivers or in dense stands of reeds, bushes, mangroves or deciduous trees up to 5 m above the ground1. Within colonies neighbouring nests are usually quite close together, no more than 1 or 2m apart. Breeding colonies are normally sited within 10-15 km of feeding areas, often much less (although the species may also feed up to 35-40 km away).

Threats to the Eurasian Spoonbill include habitat destruction by drainage and degradation by pollution, It is especially adversely affected by the disappearance of reed swamps. In Greece over-fishing and disturbance have caused the population to decline, and human exploitation of eggs and nestlings for food has threatened the species in the past.  As stated above it has recently started to breed in the United Kingdom from where it was extirpated in the 17th Century. 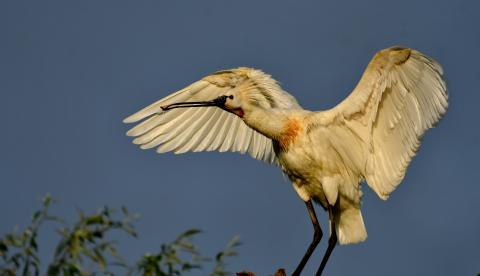 Come in this place in spring(mars) and leave the Danube Delta in septeber-october.