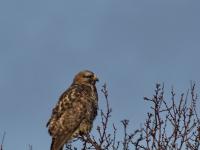 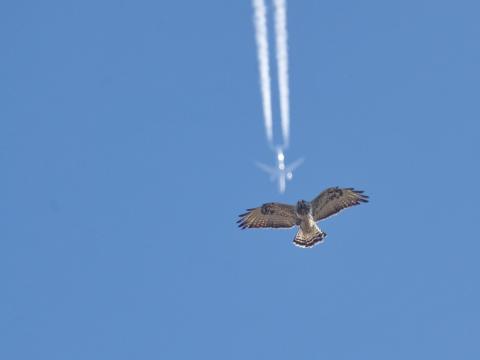 The Rough-legged Buzzard (Buteo lagopus), called the Rough-legged Hawk in North America, is a medium-large bird of prey. It is found in Arctic and Subarctic regions of North America and Eurasia during the breeding season and migrates south for the winter.

Nests are typically located on cliffs, bluffs or in trees. Clutch sizes are variable with food availability but 3–5 eggs are usually laid.These hawks hunt over open land, feeding primarily on small mammals. Along with the kestrels, kites and Osprey, this is one of the few birds of prey to hover regularly.

Its feet are feathered to the toes (hence its scientific name, lagopus, meaning "hare-footed") as an adaptation to its arctic home range. Lagopus is derived from Ancient Greek lago (λαγως), meaning "hare", and pous (πους), meaning "foot". Its talons are relatively small, reflecting their preferred choice of prey. A broad brown chestband is present in most plumages and a square dark carpal patch contrasting with the white under-wing is an easily identifiable characteristic in light morph individuals. The species exhibits a wide variety of plumage patterns including light and dark morphs.

Distinguishing characteristics in all plumages include long white tail feathers with one or more dark subterminal bands. The wing tips are long enough to reach or extend past the tail when the animal is perched.The Common Buzzard can be similar-looking, with a similar long-tailed shape and can be notoriously variable in plumage. The Rough-legged is longer-winged and more eagle-like in appearance. The Red-tailed Hawk is chunkier-looking and differs in its darker head, broader, shorter wings, barring on the wings and the tail, dark leading edge to the wings (rather than black wrist patch) and has no white base to the tail. The Ferruginous Hawk is larger, with a bigger, more prominent bill and has a whitish comma at the wrist and all-pale tail.

It is the only hawk of its size (other than the very different-looking Osprey) to regularly hover over one spot, by beating its wings quickly.

The Rough-legged Hawk is a member of the genus Buteo, a group of moderately large raptors exhibiting broad wings, short tails and wide robust bodies. This group is known a hawks in North America but referred to as buzzards in Europe.

There are at least 3 recognized subspecies of Buteo lagopus: