The slender-billed gull (Chroicocephalus genei) is a mid-sized gull which breeds very locally around the Mediterranean and the north of the western Indian Ocean (e.g. Pakistan) on islands and coastal lagoons. Most of the population is somewhat migratory, wintering further south to north Africa and India, and a few birds have wandered to western Europe. A stray individual was reportedly seen on Antigua, April 24, 1976 (AOU, 2000). The scientific name of this bird commemorates the Italian naturalist Giuseppe Gené.

This species is 37 to 40 cm (14.6 to 15.7 in) long with a 90 to 102 cm (35.4 to 40.2 in) wingspan. It is therefore slightly larger than the black-headed gull, which it resembles, although it does not have a black hood in summer. It has a pale grey body, white head and breast and black tips to the primary wing feathers. The head and dark red bill have an elongated tapering appearance, and this bird also appears long-necked. The legs are dark red, and the iris is yellow. In summer, the breast has a faint pink colouration. This bird takes two years to reach maturity, as is usual in gulls. First year immature birds have a black terminal tail band, and dark areas on the wings.

The slender-billed gull breeds in lagoons and lakes around the Mediterranean Sea and in similar locations in countries bordering the northwestern part of the Indian Ocean. In 2010 a successful colony was found breeding on an island in a mountain lake in Algeria. The lack of predators and disturbance allowed over 98% of the eggs to hatch.It overwinters on the coast in estuaries and bays. It feeds in deltas, marshes and grassland. It is one of a number of species of gull to feed on landfill sites.

About half of the slender-billed gull's food is fish. It flies a few metres above the surface of the water and dives into the water when it sees suitable prey. It also probes in the mud with its beak and feeds on marine invertebrates. It also catches insects in flight.

This rather uncommon gull breeds in colonies, nesting on the ground and laying up to three brown-spotted white eggs in a scrape sparsely lined with feathers and bits of vegetation. Incubation takes about 25 days and the young fly after another 25 days. Like most gulls, it is gregarious in winter, both when feeding and in evening roosts. It is not a pelagic species, and is rarely seen far from land. 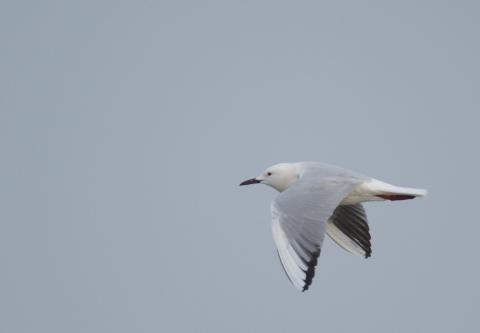