The Lesser Whitethroat (Sylvia curruca) is a common and widespread typical warbler which breeds in temperate Europe, except the southwest, and in western and central Asia. This small passerine bird is strongly migratory, wintering in Africa just south of the Sahara, Arabia and India.

Unlike many typical warblers, the sexes are almost identical. This is a small species with a grey back, whitish underparts, a grey head with a darker "bandit mask" through the eyes and a white throat. It is slightly smaller than the Whitethroat, and lacks the chestnut wings and uniform head-face color of that species. The Lesser Whitethroat's song is a fast and rattling sequence of tet or che calls, quite different from the Whitethroat's scolding song. 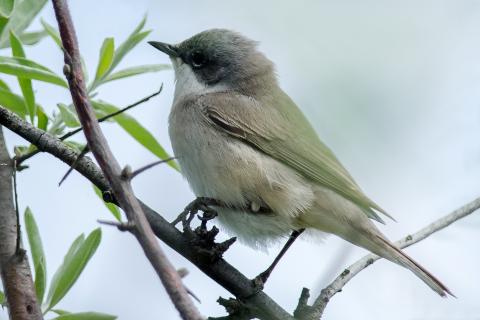 Like most "warblers", it is insectivorous, but will also take berries and other soft fruit. This is a bird of fairly open country and cultivation, with large bushes for nesting and some trees. The nest is built in low shrub or brambles, and 3–7 eggs are laid.

This species was first described by Carl Linnaeus in his 1758 edition of Systema Naturae, from a specimen collected in southern Sweden.

This species has been commonly assumed to be closely related to the Whitethroat, as their common names imply. It was suggested that the two species separated in the last ice age similar to the pattern found in the Chiffchaff and Willow Warbler, with their ancestor being forced into two enclaves, one in the southeast and one in the southwest of Europe. When the ice sheets retreated, the two forms supposedly no longer recognised each other as the same species. However, scientists researching this question have for quite some time realized that these two taxa are not particularly close relatives.

Rather, the Lesser Whitethroat and its closest relatives Hume's Whitethroat and the Small Whitethroat appear more related to a group of morphologically quite dissimilar species. These vary much in size and color pattern, but also lack chestnut wing patches and have a strong contrast between the usually dark head sides and the white or whitisch throat. The latter group occurs from the southern parts of the Lesser Whitethroat complex' range into Africa and include the Orphean Warbler group, the Arabian Warbler, and the Brown and Yemen Warblers sometimes placed in Parisoma.[2][3] Thus, it rather appears as if the divergence of the Lesser Whitethroat complex and its closest living relatives is more ancient than assumed, and that it did not involve separation by ice sheets building up in Europe, but by aridification of the Arabian region (which also occurred throughout the Ice Ages). 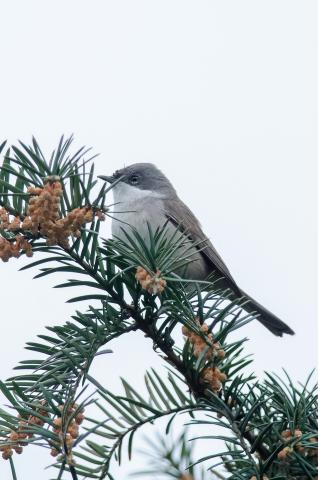 Two more taxa occur in the intergradation zone with the Small Whitethroat, stretching from the northern Caspian Sea area into Mongolia.The phylogeny of these is not well-researched, and they might eventually turn out to belong to either species or be stereotyped hybrids:

Similarly, Sylvia curruca caucasica is intermediate between the Lesser and Hume's Whitethroats.

A bird which wintered at Landsort Bird Observatory, Sweden, differed in the analyzed mtDNA sequences from all known taxa in the complex, although it most closely resembled halimodendri in the field. As mtDNA is inherited from the mother only, were this bird a hybrid this should have been recognizable.