The Sardinian warbler (Sylvia melanocephala) is a common and widespread typical warbler from the Mediterranean region. Like most Sylvia species, it has distinct male and female plumages. The adult male has a grey back, whitish underparts, black head, white throat and red eyes. Plumages are somewhat variable even in the same locality, with the intensity of a reddish hue on upper- and/or underside varies from absent to (in some subspecies) pronounced. The female is mainly brown above and buff below, with a grey head. The Sardinian warbler's song is fast and rattling, and is very characteristic of the Mediterranean areas where this bird breeds. 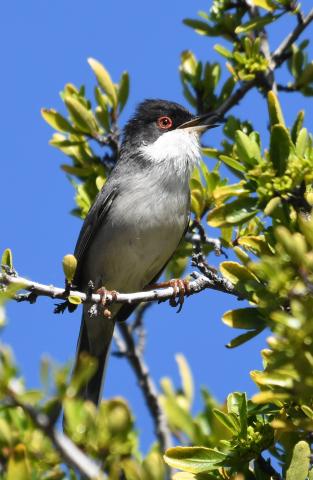 The first formal description of the Sardinian warbler was by the German naturalist Johann Friedrich Gmelin in 1789 in the 13th edition of the Systema naturae. He coined the binomial name Motacilla melanocephala. The current genus Sylvia was introduced in 1769 by the Italian naturalist Giovanni Antonio Scopoli. The genus name is from Modern Latin silvia, a woodland sprite, related to silva, a wood. The specific melanocephala is from Ancient Greek melas, "black", and kephale, "head".

Together with Menetries' warbler the Sardinian warbler forms a superspecies. Both have white malar areas and light throats, and otherwise black heads in adult males, as well as a naked ring around the eye. The subalpine warbler, which seems the superspecies' closest relative, has a dark throat and breast and a dark gray upper head in males, but otherwise shares these characters. These three species are related to a dark-throated superspecies consisting of Rüppell's warbler and the Cyprus warbler, which also share the white malar area with blackish above.

This bird may be considered a superspecies, divided into the western Sylvia melanocephala and Sylvia momus from the more arid regions of the Near East and adjacent Africa. 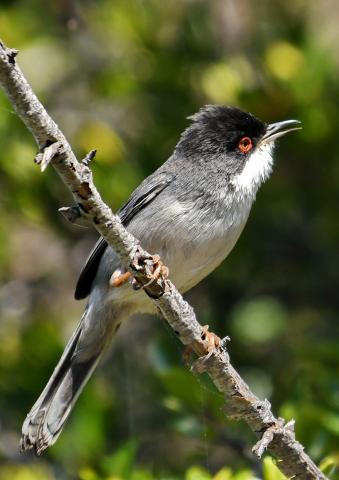 The geographical variation in the Sardinian warbler conforms to some extent with Gloger's rule, though not as strongly as in some other typical warblers. The validity of leucogastra and norissae is not accepted by some authors, and valverdei has been described very recently. On the other hand, leucogastra might be more than one subspecies.

Iberia across the northern Mediterranean to western Turkey. Extends into the Maghreb from Iberia, and into Libya from Italy via Sicily. Migrates to the Sahel and oases in the Sahara in winter.
Large, long wings, tail tip rather pointed. A dark form, usually lacking any reddish in males but flanks extensively grey. Females' uppersides vary between deep olive brown and greyish olive.

Canary Islands, resident, probably some vagrancy between eastern islands and Maghreb.
Medium size, short-winged and large-billed. Tenerife and La Palma (western) birds are most distinct, being dark above with some rusty/beige hue on the underside in males. Eastern birds (Fuerteventura, Lanzarote and Gran Canaria) are more like melanocephala and momus but differ in measurements.

Nile Delta region. Extinct since around 1940.
Like momus, but tend to be very reddish.

From Tiznit (Morocco) south to the Tropic of Cancer, inland to the edge of the Sahara. Resident, but some seasonal movements.
Medium-sized, tail tip quite square. A very pure-colored form, the palest subspecies. Undersides clean white. Matte black cap in males. Juveniles decidedly sandy.

It breeds in the southernmost areas of Europe and just into Asia in Turkey and the eastern end of the Mediterranean. This small passerine bird, unlike most "warblers", is not particularly migratory, but some birds winter in north Africa, and it occurs as a vagrant well away from the breeding range, as far as Great Britain.

This is a bird of open country and cultivation, with bushes for nesting. The nest is built in low shrub or brambles, and 3-6 eggs are laid. Like most "warblers", it is insectivorous, but will also take berries and other soft fruit. 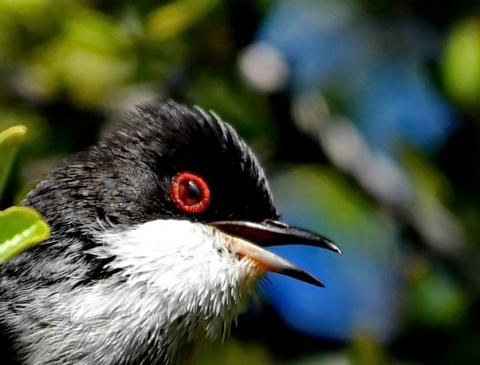