The Ruff (Philomachus pugnax) is a medium-sized wading bird that breeds in marshes and wet meadows across northern Eurasia. This highly gregarious sandpiper is migratory and sometimes forms huge flocks in its winter grounds, which include southern and western Europe, Africa, southern Asia and Australia. It is usually considered to be the only member of its genus, and the Broad-billed and Sharp-tailed Sandpipers are its closest relatives. The Ruff is a long-necked, pot-bellied bird. This species shows marked sexual dimorphism; the male is much larger than the female (the reeve), and has a breeding plumage that includes brightly coloured head tufts, bare orange facial skin, extensive black on the breast, and the large collar of ornamental feathers that inspired this bird's English name. The female and the non-breeding male have grey-brown upperparts and mainly white underparts. Three differently plumaged types of male, including a rare form that mimics the female, use a variety of strategies to obtain mating opportunities at a lek, and the colourful head and neck feathers are erected as part of the elaborate main courting display. The female has one brood per year and lays four eggs in a well-hidden ground nest, incubating the eggs and rearing the chicks, which are mobile soon after hatching, on her own. Predators of wader 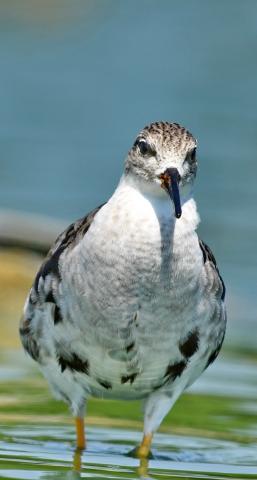 chicks and eggs include mammals such as foxes, feral cats and stoats, and birds such as large gulls, corvids and skuas. The Ruff forages in wet grassland and soft mud, probing or searching by sight for edible items. It primarily feeds on insects, especially in the breeding season, but it will consume plant material, including rice and maize, on migration and in winter. Classified as "least concern" on the IUCN Red List criteria, the global conservation concerns are relatively low because of the large numbers that breed in Scandinavia and the Arctic. However, the range in much of Europe is contracting because of land drainage, increased fertiliser use, the loss of mown or grazed breeding sites, and over-hunting. This decline has seen it listed in the Agreement on the Conservation of African-Eurasian Migratory Waterbirds (AEWA). The Ruff is a wader in the large family Scolopacidae, the typical shorebirds. It is the sole member of the genus Philomachus, and recent research suggests that its closest relatives are the Broad-billed Sandpiper Limicola falcinellus and the Sharp-tailed Sandpiper Calidris acuminata. It has no recognised subspecies or geographical variants. This species was first described by Carl Linnaeus in his Systema Naturae in 1758 as Tringa pugnax. It was moved into its current genus by German naturalist Blasius Merrem in 1804.[5] Both parts of the binomial name refer to the aggressive behaviour of the bird at its mating arenas; Philomachus is derived from Ancient Greek philo- "loving" and machē "battle", and pugnax from the Latin term for "combative". The original English name for this bird, dating back to at least 1465, is the ree, perhaps derived from a dialectical term meaning "frenzied"; a later name reeve, which is still used for the female, is of unknown origin, but may be derived from the shire-reeve, a feudal officer, likening the male's flamboyant plumage to the official's robes. The current name was first recorded in 1634, and is derived from the ruff, an exaggerated collar fashionable from the mid-sixteenth century to the mid-seventeenth century, since the male bird's neck ornamental feathers resemble the neck-wear. The Ruff has a distinctive gravy boat appearance, with a small head, medium-length bill, longish neck and pot-bellied body. It has long legs that are variable in colour but usually yellow or orange. In flight, it has a deeper, slower wing stroke than other waders of a similar size, and displays a thin, indistinct white bar on the wing, and white ovals on the sides of the tail . This species shows sexual dimorphism. Although a small percentage of males resemble females,] the typical male is much larger than the female and has an elaborate breeding plumage. He is 29–32 cm (11.4–12.6 in) long with a 54–60 cm (21.25–23.6 in) wingspan, and weighs about 180 g (6.4 oz). In the May-to-June breeding season, the typical male's legs, bill and warty bare facial skin are orange, and he has distinctive head tufts and a neck ruff. These ornaments vary on individual birds, being black, chestnut or white, with the colouring solid, barred or irregular.The grey-brown back has a scale-like pattern, often with black or chestnut feathers, and the underparts are white with extensive black on the breast. The extreme variability of the main breeding plumage is thought to have developed to aid individual recognition in a species that has communal breeding displays, but is usually mute. Outside the breeding season, the typical male's head and neck decorations and the bare facial skin are lost and the legs and bill become duller. The upperparts are grey-brown, and the underparts are white with grey mottling on the breast and flanks. The female, or "reeve", is 22–26 cm (8.7–10.2 in) long with a 46–49 cm (18.1–19.32 in) wingspan, and weighs about 110 g (3.9 oz).] In breeding plumage, she has grey-brown upperparts with white-fringed, dark-centred feathers. The breast and flanks are variably blotched with black. In winter, her plumage is similar to that of the male, but the sexes are distinguishable on size. The plumage of the juvenile Ruff resembles the non-breeding adult, but has upperparts with a neat, scale-like pattern with dark feather centres, and a strong buff tinge to the underparts. Typical adult male Ruffs start to moult into the main display plumage before their return to the breeding areas, and the proportion of birds with head and neck decorations gradually increases through the spring. Second-year birds lag behind full adults in developing breeding plumage. They have a lower body mass and a slower weight increase than full adults, and perhaps the demands made on their energy reserves during the migration flight are the main reason of the delayed moult. Ruffs of both sexes have an additional moult stage between the winter and final summer plumages, a phenomenon also seen in the Bar-tailed Godwit. Before developing the full display finery with coloured ruff and tufts, the males replace part of their winter plumage with striped feathers. Females also develop a mix of winter and striped feathers before reaching their summer appearance. The final male breeding plumage results from the replacement of both winter and striped feathers, but the female retains the striped feathers and replaces only the winter feathers to reach her summer plumage. 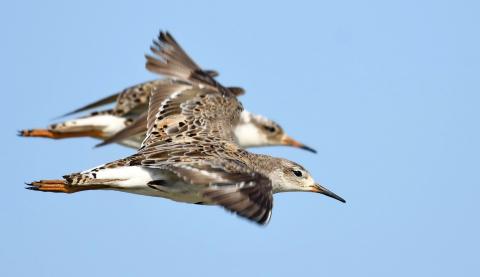 The most important breeding populations in Europe, in Russia and Sweden are stable, and the breeding range in Norway has expanded to the south, but populations have more than halved in Finland, Poland, Latvia and The Netherlands. Although the small populations in these countries are of limited overall significance, the decline is a continuation of trend towards range contraction that has occurred over the last two centuries. The drop in numbers in Europe has been attributed to drainage, increased fertiliser use, the loss of formerly mown or grazed breeding sites and over-hunting. Fossils from the Pleistocene suggest that this species bred further south in Europe in the cool periods between glaciations than it does now. Its sensitivity to changing climate as well as to water table levels and the speed of vegetation growth has led to suggestions that its range is affected by global warming, and the Ruff might act as an indicator species for monitoring climate change. Potential threats to this species may also include outbreaks of diseases to which it is susceptible such as influenza, botulism and avian malaria. The Ruff is one of the species to which the Agreement on the Conservation of African-Eurasian Migratory Waterbirds (AEWA) applies, where it is allocated to category 2c; that is, the populations in need of special attention as they are showing "significant long-term decline" in much of its range. This commits signatories to regulate the taking of listed species or their eggs, to establish protected areas to conserve habitats for the listed species, to regulate hunting and to monitor the populations of the birds concerned.