The ring ouzel (Turdus torquatus) is a European member of the thrush family, Turdidae. It is the mountain equivalent of the closely related common blackbird, and breeds in gullies, rocky areas or scree slopes.

"Ouzel" (or "ousel") is an old name for common blackbird from Old English osle. "Ouzel" may also be applied to a group of superficially similar but unrelated birds, the dippers, the European representative of which is sometimes known as the water ouzel.

As with the English name, the scientific name also refers to the male's obvious white neck crescent, being derived from the Latin words turdus, "thrush", and torquatus, "collared". 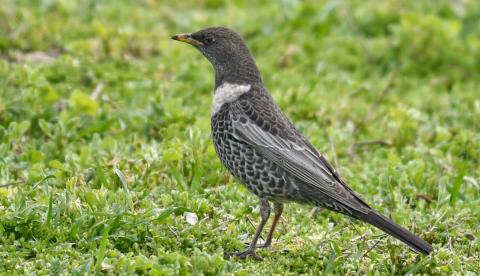 The adult male is all black except for a white crescent on the breast and a yellowish bill. The wings have a silvery appearance due to white feather edgings. The male sings its loud and mournful song from trees or rocks.

The female is similar but duller, and younger birds often lack the breast crescent. The juvenile has brown plumage.

It breeds in the higher regions of western and central Europe and also in the Caucasus and in the Scandinavian mountains. Most populations are migratory, wintering in the Mediterranean region. It is declining in parts of its range, particularly in Ireland.

It is territorial and normally seen alone or in pairs, although loose flocks may form on migration. When not breeding, several birds may also be loosely associated in good feeding areas, such as a fruiting tree, often with other thrushes.

The ring ouzel nests in bushes or amongst rocks, laying several pale blue eggs, mottled with brown, in a neat cup-shaped nest.