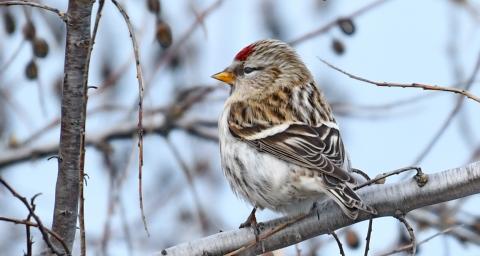 The common redpoll (Acanthis flammea) is a species of bird in the finch family. It breeds somewhat further south than the Arctic redpoll, also in habitats with thickets or shrubs.

The common redpoll was listed in 1758 by Linnaeus in the 10th edition of his Systema Naturae under the binomial name Fringilla flammea. The current genus name Acanthis is from the Ancient Greek akanthis, a name for a small now-unidentifiable bird, and flammea is the Latin for "flame-coloured".

The common redpoll was previously placed in the genus Carduelis. Molecular phylogenetic studies showed that the Arctic and common redpolls formed a distinct lineage, so the two species were grouped together in the resurrected genus Acanthis. 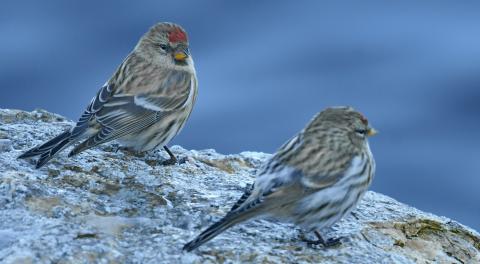 The nominate subspecies A. f. flammea, the mealy redpoll, breeds across the northern parts of North America and Eurasia. There is also an Icelandic subspecies, the Icelandic redpoll (A. f. islandica), and one that breeds in Greenland and Baffin Island called the Greenland redpoll (A. f. rostrata). Many taxonomic authorities consider the lesser redpoll a subspecific form of the common redpoll.Together the Iceland and Greenland forms are sometimes known as 'northwestern redpolls'. All forms migrate south into Canada, northern USA, or Eurasia. These birds are remarkably resistant to cold temperatures and winter movements are mainly driven by the availability of food. There are two distinct populations (one lighter, one darker) united in islandica, the relationships of which are unresolved.

The common redpoll is a small brownish-grey finch with dark streaks and a bright red patch on its forehead. It has a black bib and two pale stripes on the wings. Males often have their breasts suffused with red. It is smaller, browner and more streaked than the generally similar Arctic redpoll, adults measuring between 11.5 and 14 centimetres (4.5 and 5.5 in) in length and weighing between 12 and 16 grams (0.42 and 0.56 oz). The rump is streaked and there is a broad dark brown streak across the vent. It has brown legs, dark-tipped yellowish bills and dark brown irises.

The mealy redpoll is larger and paler than the lesser redpoll with which it often mixes, apparently without significant interbreeding though sympatry was established too recently to draw firm conclusions. The male mealy redpolls are darker than the similarly sized Arctic redpolls but the females are almost identical.

The range of the common redpoll extends through northern Europe and Asia to northern North America, Greenland and Iceland. It is a partial migrant, moving southward in late autumn and northward again in March and April. Its typical habitat is boreal forest of pines, spruces and larches. It feeds mainly on seeds, principally birch and alder seed in the winter.

The common redpoll builds its nest low down in a tree or bush. The nest has an outer layer of thin twigs, a middle layer of root fibres, fragments of juniper bark and lichens and an inner layer of down, willow buds and reindeer hair. Three to seven speckled eggs are laid and incubated by the female. They hatch after about eleven days and the young fledge in about a further thirteen days.