The Red-footed Falcon (Falco vespertinus), formerly Western Red-footed Falcon, is a bird of prey. It belongs to the family Falconidae, the falcons. This bird is found in eastern Europe and Asia although its numbers are dwindling rapidly due to habitat loss and hunting. It is migratory, wintering in Africa. It is a regular wanderer to western Europe, and in August 2004 a Red-footed Falcon was found in North America for the first time on the island of Martha's Vineyard, Massachusetts.

The Amur Falcon was formerly included herein as a subspecies but it is nowadays considered well distinct. Nonetheless, it is the present species' closest relative; their relationship to other falcons is more enigmatic. They appear morphologically somewhat intermediate between kestrels and hobbies and DNA sequence data has been unable to further resolve this question, mainly due to lack of comprehensive sampling. They might be closer to the Merlin than to most other living falcons, or more generally related to this species and American falcons such as the American Kestrel and the Aplomado Falcon.

It is a medium-small, long-winged species. The adult male is all blue-grey, except for his red undertail and legs; its underwings are uniformly grey. The female has a grey back and wings, orange head and underparts, and a white face with black eye stripe and moustaches. 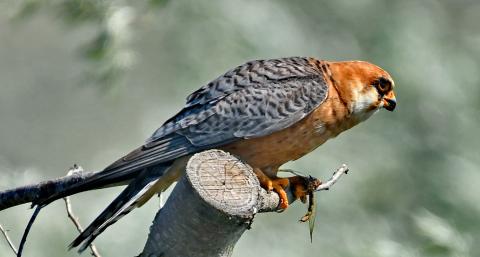 This is a diurnal bird of open country with some trees, often near water. Its distinctive method of hunting is shared by the Common Kestrel. It regularly hovers, searching the ground below, then makes a short steep dive towards the target. The Red-footed Falcon's main prey is large insects, but it will also take small mammals and birds.

This falcon is a colonial breeder, reusing the old nests of corvids, such as Rooks. It lays two to four eggs.

In the Danube Delta are two colony where they briding together with Corvus frugilegus. We estimate aprox. 200 couples and the best time for photos is mounth of May.