The Red-breasted Goose (Branta ruficollis) is a brightly marked, endangered species of goose in the genus Branta from Eurasia. It is sometimes separated in Rufibrenta but appears close enough to the Brent Goose (Branta bernicla) to make this unnecessary, despite its distinct appearance.

All the species of the Branta genus are distinguished by their dark sooty colour, relieved by white, and as a distinction from the grey geese of the genus Anser. Among the species from these two genera, the Red-breasted Goose is the smallest at 53–56 centimetres (21–22 in) in length.This brightly marked species is unmistakable, but can be surprisingly difficult to find amongst Brent Geese. At long distances, the red of the breast tends to look dark, and the broad white stripe on the flank is more evident 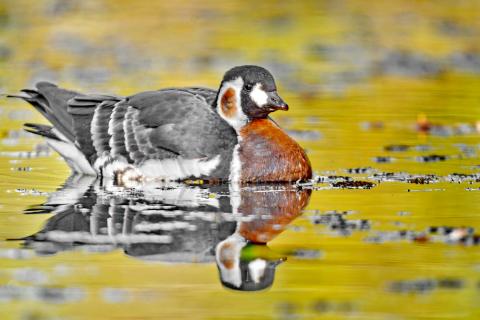 The Red-breasted Goose breeds in Arctic Siberia, mainly on the Taymyr Peninsula, with smaller populations in the Gydan and Yamal peninsulas. Most winter along the northwestern shores of the Black Sea in Bulgaria, Romania and Ukraine (occasionally moving further southwest to Greece), but some winter in Azerbaijan.[3] It is a rare vagrant to Great Britain and other western European areas, where it is sometimes found with flocks of Brent or Barnacle Geese. However, since it is common in captive wildfowl collections, escapees outside its usual range are fairly frequent.

The Red-breasted Goose often nests close to nests of birds of prey, such as Snowy Owls and Peregrine Falcons, which helps to protect this small goose from mammalian predators such as the Arctic Fox 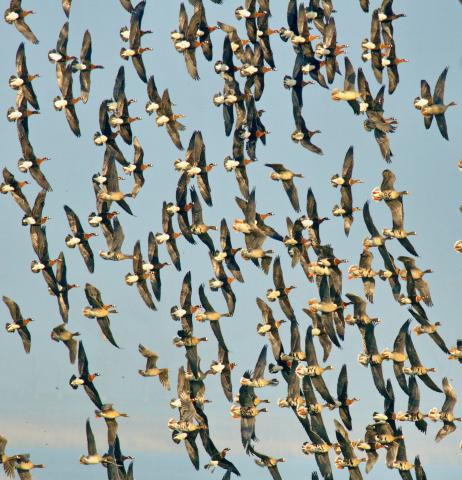 The Red-breasted Goose is one of the species to which the Agreement on the Conservation of African-Eurasian Migratory Waterbirds (AEWA) applies. It was considered a Vulnerable species by the IUCN. Over 80% of the population roost during the winter at just five sites, with nearby feeding areas threatened by changes in land use. In addition, there has been a strong decline in numbers in the last decades. As it is not clear to what extent the known population fluctuates in this species – as in other Arctic geese – and given the worsening outlook for the species as a whole, the Red-breasted Goose was uplisted from a species of Least Concern to Endangered status in the 2007 IUCN Red List.