The Ortolan, or Ortolan Bunting (Emberiza hortulana) is a bird in the bunting family Emberizidae, a passerine family now separated by most modern authors from the finches, Fringillidae. The bird's common name is French, from the Latin hortulanus, the gardener bird, (from hortus, a garden).

A native of most European countries and western Asia, the Ortolan migrates in autumn to tropical Africa, returning at the end of April or beginning of May. Its distribution throughout its breeding range seems to be very local, and for this no obvious reason can be assigned. It was said in France to prefer wine-growing districts;[citation needed] but it certainly does not feed upon grapes, and is found equally in countries where vineyards are unknown. It reaches as far north as Scandinavia and beyond the Arctic Circle, frequenting cornfields and their neighbourhoods. It is an uncommon vagrant in spring and particularly autumn to the British Isles.

The Ortolan is 16 cm in length and weighs 20–25 grams (0.71–0.88 oz). In appearance and habits it much resembles its congener the Yellowhammer, but lacks the bright colouring of that species; the Ortolan's head, for instance, is greenish-grey, instead of a bright yellow. The somewhat monotonous song of the cock resembles that of the Yellowhammer.

Ortolan nests are placed on or near the ground; the eggs seldom show the hair-like markings so characteristic of most buntings' eggs.

Seeds are the natural diet, but beetles and other insects are eaten when feeding young.

In September 2007, the French Government announced its intent to enforce long ignored laws protecting the bird. 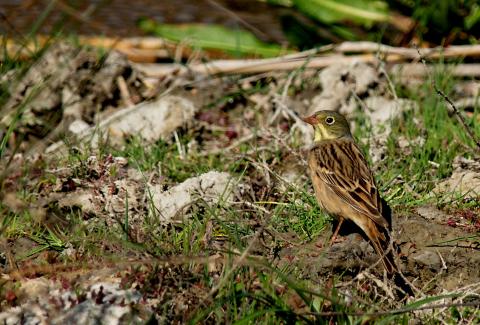 The ortolan is force-fed by being placed in a dark box with millet, where as a reaction to darkness it proceeds to eat continuously. One way French diners ate ortolans was to cover their heads and face with a large napkin for the gourmet's aesthetic desire to absorb the maximum odour with the flavor. This famous use of the towel was launched by a priest, a friend of Jean Anthelme Brillat-Savarin.

Anthony Bourdain describes the eating of ortolans in the opening to his 2010 book Medium Raw.

At one time, the island of Cyprus formed a chief depot for the exportation of ortolans, which were pickled in spices and vinegar and packed in casks containing from 300 to 400 each. In the early 20th century, from 400 to 500 casks were annually exported from Cyprus.

In 1975, food critic Craig Claiborne made a winning $300 bid in an auction for a dinner for two, courtesy of American Express, at any restaurant in the world that takes its credit card. Claiborne selected Chez Denis in Paris for a $4000 meal that included a course of ortolans.

Ortolan hunting was banned in France in 1999, but the law was poorly enforced and it is thought that up to 50,000 ortolans were killed each year. In 2007, the pressure from France's League for Protection of Birds and from the European Union resulted in the French government promising to enforce the EU directive protecting the ortolan.

In the Danube Delta is a comun bird in spring time, easy to see near Black Sea coast in St. Gheorghe villagge  or Babadag forest.