The Long-tailed Tit or Long-tailed Bushtit (Aegithalos caudatus) is a common bird found throughout Europe and Asia. There are several extensive accounts of this species, most notably Cramp and Perrins, 1993; Gaston, 1973; and Harrap and Quinn, 1996. The majority of relevant research has been directed at its social and breeding behaviour.

The Long-tailed Tit was first classified as a true tit of the Parus group. Parus has since been split from the Aegithalidae, becoming a distinct family containing three genera:

This is the only representative of the Aegithalidae in northern Eurasia. The Long-tailed Tit exhibits complex global variation with 19 races recognised, divisible into four groups:

Where the groups meet there are extensive areas occupied by very variable ‘hybrids’. The British Long-tailed Tit, subspecies rosaceus, belongs to the europaeus group. Biochemical evidence has shown Aegithalidae to be closely related to the babblers.

This species has been described as a tiny (at only 13–15 cm in length, including its 7–9 cm tail), round-bodied tit with a short, stubby bill and a very long, narrow tail. The sexes look the same and young birds undergo a complete moult to adult plumage before the first winter. The plumage is mainly black and white, with variable amounts of grey and pink.

The Long-tailed Tit is globally widespread throughout temperate northern Europe and Asia, into boreal Scandinavia and south into the Mediterranean zone It inhabits deciduous and mixed woodland with a well-developed shrub layer, favouring edge habitats. It can also be found in scrub, heathland with scattered trees, bushes and hedges, in farmland and riverine wood landparks and gardens. The bird's year-round diet of insects and social foraging bias habitat choice in winter towards deciduous woodland, typically of Oak (Quercus sp.), Ash (Fraxinus sp.) and locally Sycamore species. For nesting, strong preference is shown towards scrub areas. The nest is usually built in thorny bushes less than 3 metres above the ground.

Globally, common throughout its range, only becoming scarce at the edge of the distributionThe IUCN, Birdlife International and The British Trust for Ornithology (BTO) all list Aegithalos caudatus as a ‘species of least concern’, currently under little or no threat and is reasonably abundant. Due to their small size they are vulnerable to extreme cold weather with population losses of up to 80% being recorded in times of prolonged cold. It is thought that populations rapidly return to previous levels due to high breeding potential 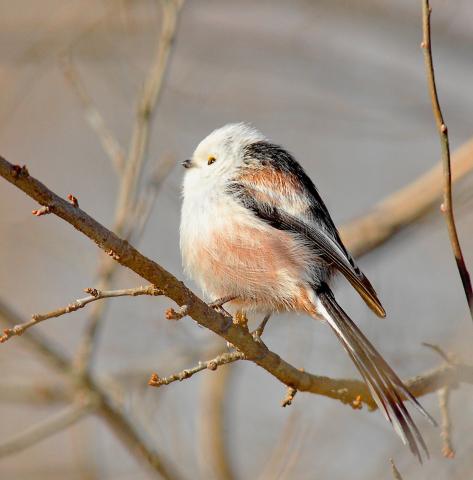 The Long-tailed Tit is insectivorous throughout the year. It eats predominately arthropods, preferring the eggs and larvae of moths and butterflies. Occasional vegetable matter is taken in the autumn.

The nest of the Long-tailed Tit is constructed from four materials - lichen, feathers, spider egg cocoons and moss, over 6000 pieces in all for a typical nest. The nest is a flexible sac with a small, round entrance on top, suspended either low in a gorse or bramble bush or high up in the forks of tree branches. The structural stability of the nest is provided by a mesh of moss and spider silk. The tiny leaves of the moss act as hooks and the spider silk of egg cocoons provides the loops; thus forming a natural form of velcro. The tit lines the outside with hundreds of flakes of pale lichens - this provides camouflage. Inside, it lines the nest with more than 2000 downy feathers to insulate the nest.

Outside the breeding season they form compact flocks of 3 to 30 birds, composed of family parties (parents and offspring) from the previous breeding season, together with any extra adults that helped to raise a brood (see below), These flocks will occupy and defend territories against neighbouring flocks. The driving force behind the flocking behaviour is thought to be that of winter roosting, being susceptible to cold; huddling increases survival through cold nights.

In February–March, all members of the winter flock will pair and attempt to nest, with the males remaining within the winter territory and the females having a tendency to wander to neighbouring territories.The nests are compact, domed constructions made from moss woven together with spider webs and hair. The outside is camouflaged with up to 3,000 flakes of lichen and lined with an average of 1,500 (up to 2,600) small feathers. Nests suffer a high rate of predation with only 17% success. 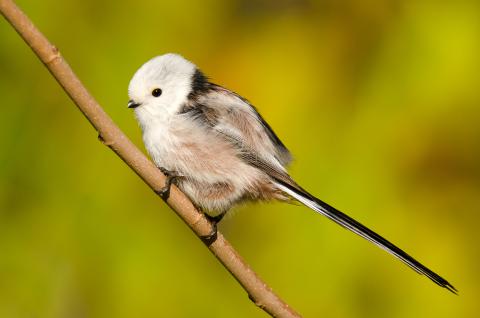 Pairs whose nests fail have three choices: try again, abandon nesting for the season or help at a neighbouring nest. It has been shown that failed pairs split and help at the nests of male relatives,recognition being established vocally, The helped nests have greater success due to higher provisioning rates and better nest defence. At the end of the breeding season, in June–July, the birds reform the winter flocks in their winter territory.

Vocalisations are a valuable aid to locating and identifying these birds. When in flocks they issue constant contact calls and are often heard before they are seen. They have three main calls, a single high pitched ‘pit’, a ‘triple trill’ eez-eez-eez, and a rattling ‘schnuur’. The calls become faster and louder when the birds cross open ground or if an individual becomes separated from the group.