The Long-eared Owl - Asio otus (previously: Strix otus) is a species of owl which breeds in Europe, Asia, and North America. This species is a part of the larger grouping of owls known as typical owls, family Strigidae, which contains most species of owl. The other grouping of owls are the barn owls, family Tytonidae. The Long-eared Owl is a medium sized owl, 31–40 cm (12–16 in) in length with an 86–100 cm (34–39 in) wingspan and a body mass of 178–435 g (6.3–15.3 oz). It has erect blackish ear-tufts, which are positioned in the center of the head. The ear-tufts are used to make the owl appear larger to other owls while perched. The female is larger in size and darker in coloration than the male. The Long-eared Owl’s brownish feathers are vertically streaked. Tarsus and toes are entirely feathered. Eye disks are also characteristic in this species. However, the eye disks of A. otus are darker in color or rusty-orange. This nocturnal species is perhaps most easily seen perched in a tree in its daytime roost, sometimes in small groups during the winter months. Separation from Short-eared Owl Over much of its range, Long-eared Owl occurs with the similar-looking Short-eared Owl. At rest, the ear-tufts of Long-eared Owl serve to easily distinguish the two (although Long-eared Owl can sometimes hold its ear-tufts flat). The iris-colour differs: yellow in Short-eared, and orange in Long-eared, and the black surrounding the eyes is vertical on Long-eared, and horizontal on Short-eared. Overall Short-eared tends to be a paler, sandier bird than Long-eared. 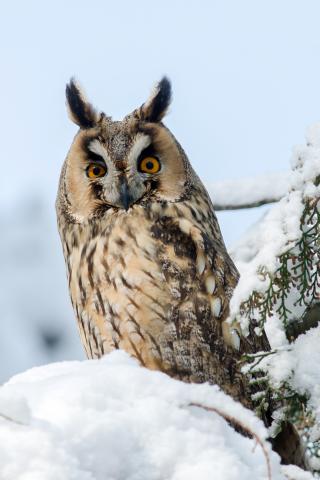 There are a number of other ways in which the two species differ which are best seen when they are flying: * Short-eared often has a broad white band along the rear edge of the wing, which is not shown by Long-eared; * on the upperwing, Short-eared Owl's primary-patches are usually paler and more obvious; * the band on the upper side of Short-eared Owl's tail are usually bolder than those of Long-eared; * Short-eared's innermost secondaries are often dark-marked, contrasting with the rest of the underwing; * Long-eared Owl has streaking throughout its underparts whereas on Short-eared the streaking ends at the breast; * the dark markings on the underside of the tips of the longest primaries are bolder on Short-eared Owl; * the upperparts are coarsely blotched, whereas on Long-eared they are more finely marked; * Short-eared Owl also differs structurally from Long-eared, having longer, slimmer wings: Long-eared Owl has wings shaped more like those of a Tawny Owl. The Long-eared Owl's breeding season is from February to July. This bird is partially migratory, moving south in winter from the northern parts of its temperate range. Its habitat is forest close to open country. It nests in trees, often coniferous, using the old stick nests of other birds such as crows, ravens and magpies and various hawks. The average clutch size is 4-6 eggs, and the incubation time averages from 25–30 days. It will readily use artificial nesting baskets. 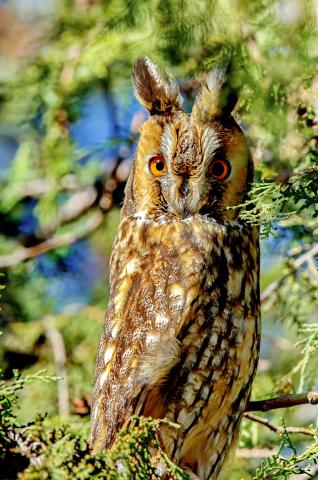 An unusual characteristic of this species is its communal roosting in thickets during the winter months. The young have a characteristic call, likened to a rusty hinge. The Long-eared Owl hunts over open country by night. It is very long winged, like the similar Short-eared Owl, and glides slowly on stiff wings when hunting. Its food is mainly rodents, small mammals, and birds. In Europe it faces competition from the tawny owl and is most numerous where the tawny is absent.