The Little Egret (Egretta garzetta) is a small white heron. It is the Old World counterpart to the very similar New World Snowy Egret.

Depending on authority, two or three subspecies of Little Egret are currently accepted 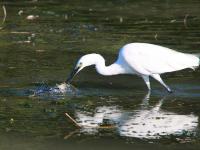 Three other egret taxa have at times been classified as subspecies of the Little Egret in the past but are now regarded as two separate species. These are the Western Reef Heron Egretta gularis which occurs on the coastline of West Africa (Egretta gularis gularis) and from the Red Sea to India (Egretta gularis schistacea), and the Dimorphic Egret Egretta dimorpha, found in East Africa, Madagascar, the Comoros and the Aldabra Islands.

Little Egrets are mostly silent but make various croaking and bubbling calls at their breeding colonies and produce a harsh alarm call when disturbed.

Its breeding distribution is in wetlands in warm temperate to tropical parts of Europe, Africa, Asia, and Australia. In warmer locations, most birds are permanent residents; northern populations, including many European birds, migrate to Africa and southern Asia. They may also wander north in late summer after the breeding season, which may have assisted its current range expansion. Globally, the Little Egret is not listed as a threatened species.

Historical research has shown that the Little Egret was once present, and probably common, in Great Britain, but became extinct there through a combination of over-hunting in the late mediaeval period and climate change at the start of the Little Ice Age. The inclusion of 1,000 egrets (among numerous other birds) in the banquet to celebrate the enthronement of George Neville as Archbishop of York at Cawood Castle in 1465 indicates the presence of a sizable population in northern England at the time, and they are also listed in the coronation feast of King Henry VI in 1429. They had disappeared by the mid 16th century, when William Gowreley, 'yeoman purveyor to the Kinges mowthe', "had to send further south" for egrets.

Further declines occurred throughout Europe as the plumes of the Little Egret and other egrets were in demand for decorating hats. They had been used for this purpose since at least the 17th century but in the 19th century it became a major craze and the number of egret skins passing through dealers reached into the millions. Egret farms were set up where the birds could be plucked without being killed but most of the supply was obtained by hunting, which reduced the population of the species to dangerously low levels and stimulated the establishment of Britain's Royal Society for the Protection of Birds in 1889. 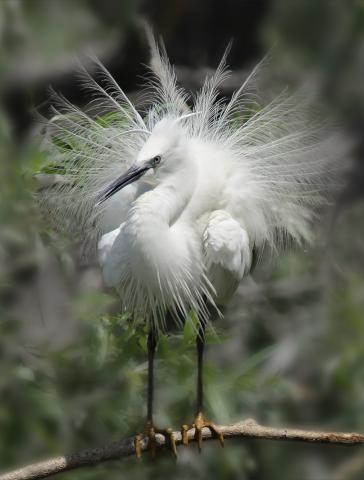 By the 1950s, the Little Egret had become restricted to southern Europe, and conservation laws protecting the species were introduced. This allowed the population to rebounded strongly; over the next few decades it became increasingly common in western France and later on the north coast. It bred in the Netherlands in 1979 with further breeding from the 1990s onward.

In Britain it was a rare vagrant from its 16th century disappearance until the late twentieth century, and did not breed. It has however recently become a regular breeding species and is commonly present, often in large numbers, at favoured coastal sites. The first recent breeding record in England was on Brownsea Island in Dorset in 1996, and the species bred in Wales for the first time in 2002. The population increase has been rapid subsequently, with over 750 pairs breeding in nearly 70 colonies in 2008, and a post-breeding total of 4,540 birds in September 2008. In Ireland the species bred for the first time in 1997 at a site in County Cork and the population has also expanded rapidly since, breeding in most Irish counties by 2010.

The Little Egret has now started to colonise the New World. The first record there was on Barbados in April 1954. It began breeding on the island in 1994. Birds are seen with increasing regularity and have occurred from Suriname and Brazil in the south to Newfoundland and Quebec in the north. Birds on the east coast of North America are thought to have moved north with Snowy Egrets from the Caribbean. In June 2011, a little egret was spotted in Maine, in the Scarborough Marsh, near the Audubon Center.

The Little Egret nests in colonies, often with other wading birds, usually on platforms of sticks in trees or shrubs or in a reedbed or bamboo grove. In some locations such as the Cape Verde Islands, they nest on cliffs. Pairs defend a small breeding territory, usually extending around 3–4 m from the nest. The three to five eggs are incubated by both adults for 21–25 days to hatching. They are oval in shape and have a pale, non-glossy, blue-green colour. The young birds are covered in white down feathers, are cared for by both parents and fledge after 40 to 45 days.