The Little Bustard (Tetrax tetrax) is a large bird in the bustard family, the only member of the genus Tetrax. It breeds in southern Europe and in western and central Asia. Southernmost European birds are mainly resident, but other populations migrate further south in winter. The central European population once breeding in the grassland of Hungary went extinct several decades ago.

This species is declining due to habitat loss throughout its range. It used to breed more widely, for example ranging north to Poland occasionally (Tomek & Bocheński 2005). It is only a very rare vagrant to Great Britain despite breeding in France.

Although the smallest Palearctic bustard, Little Bustard is still pheasant-sized at 42–45 cm (17–18 in) long with a 90–110 cm (35–43 in) wingspan and a weight of 830 g (29 oz). In flight, the long wings are extensively white. The breeding male is brown above and white below, with a grey head and a black neck bordered above and below by white. 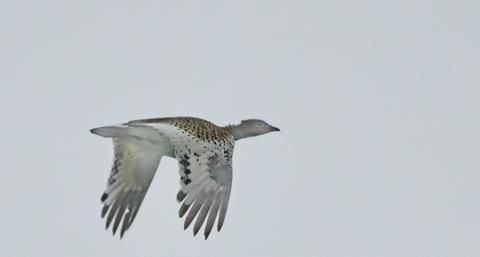 The female and non-breeding male lack the dramatic neck pattern, and the female is marked darker below than the male. Immature bustards resemble females. Both sexes are usually silent, although the male has a distinctive "raspberry-blowing" call: prrt.

This species is omnivorous, taking seeds, insects, rodents and reptiles. Like other bustards, the male Little Bustard has a flamboyant display with foot stamping and leaping in the air. Females lay 3 to 5 eggs on the ground.

This bird's habitat is open grassland and undisturbed cultivation, with plants tall enough for cover. It has a stately slow walk, and tends to run when disturbed rather than fly. It is gregarious, especially in winter.

On the 20th of December 2013 Cyprus newspapers Fileleftheros and Politis as well as SigmaLive reported the discovery of a killed bird which was last viewed in Cyprus in December 1979. The name of the bird in Greek is νανόγαλος. Politis printed a photo citing the webpage http://cyprusbirdingtours.com/, where the event was reported on December 17th,2013.

This is my second observation in the DANUBE Delta reserve.