The lesser white-fronted goose (Anser erythropus) is a goose closely related to the larger white-fronted goose (A. albifrons). It breeds in northernmost Asia, but it is a scarce breeder in Europe. There is a re-introduction scheme in Fennoscandia. The scientific name comes from anser, the Latin for "goose", and erythropus, "red-footed", derived from the old Greek eruthros "red" and pous "foot".

The lesser white-fronted goose winters further south in Europe and is a rare winter vagrant to Great Britain, and India.Individual birds formerly appeared regularly at WWT Slimbridge in Gloucestershire, England, where they inspired Sir Peter Scott to set up The Wildfowl and Wetlands Trust—modern records, however, are far less frequent, a consequence of the species' decline on its European breeding grounds. An attractive species, it is also widely kept in wildfowl collections and, as a result, escapes do occur; individuals seen in summer, or in the company of other feral geese, are likely to be of captive origin. 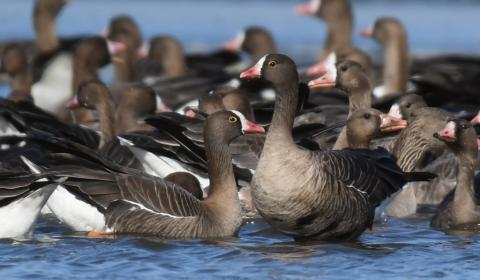 The two white-fronted goose species differ little other than in size (the lesser, at 53–66 cm (21–26 in) length and with a 120–135 cm (47–53 in) wingspan, is not much bigger than a mallard (Anas platyrhynchos) but both may be readily distinguished from the greylag goose by their bright orange legs and their mouse-coloured upper wing-coverts. The greylag goose has a flesh-coloured bill and legs, and the upper wing-coverts are bluish-grey.

Both white-front species have a very conspicuous white face and broad black bars which cross the belly.

The lesser white-fronted goose is considered an endangered species, but there are programmes to reintroduce animals into the wild to strengthen the population. Additionally it is one of the species to which the Agreement on the Conservation of African-Eurasian Migratory Waterbirds (AEWA) applies.

This genetically distinct population is now estimated at about 20 breeding pairs or 60–80 total individuals at most. They breed in Northern Norway and overwinter in Greece, Bulgaria and Turkey. There is a major stopover site at Hortobágy National Park, Hungary where the birds spend up to two months during autumn and one month during the spring migration. 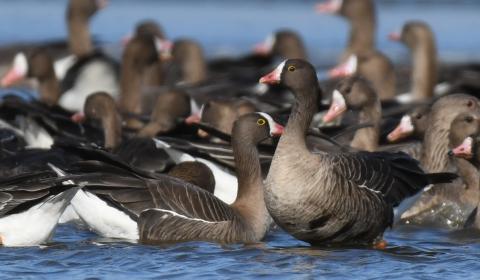 Another part of the Fennoscandian population breeds in Northern Sweden. The population size in 2015 is estimated to about 15 breeding pairs or 40-50 individuals in all. These birds follow a western migration route and spend the winter in Netherlands and Germany. According to IUCN Red LIst in 2015 the conservation status of this population is Critically Endangered.