A hobby is a fairly small, very swift falcon with long, narrow wings. There are four birds called hobby, and some others which, although termed falcon, are very similar. All specialise in being superb aerialists. Although they will take prey on the ground if the opportunity presents itself, most prey is caught on the wing: insects by hawking, birds are flown down: even swifts and swallows often cannot outpace or outmaneuver a hobby.

The typical hobbies are traditionally considered a subgenus Hypotriorchis due to their similar morphology: they have ample amounts of dark slaty grey in their plumage; the malar area is black and the underside usually has lengthwise black streaks. The tails are all-dark or have only slight bands (White et al. 1994). 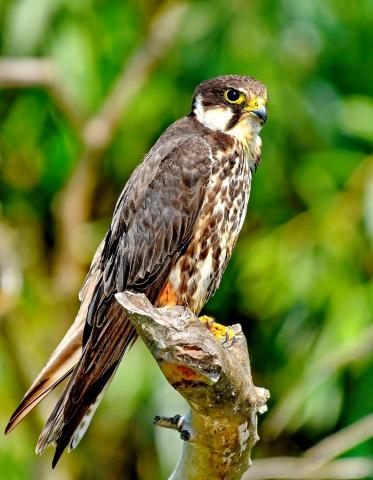 Monophyly of Hypotriorchis is supported by DNA sequence data, though the exact limits of the group are still uncertain. The hobbies seem to be one of the Falco lineages which emerged around the Miocene-Pliocene boundary some 8-5 million years ago and subsequently radiated - in this case throughout the Old World. Their relationship to the Peregrine Falcon group and the kestrels is not well resolved, however; taxa like the Red-footed Falcon appear in some respects intermediate between the kestrels and the typical hobbies.[1]