The gull-billed tern (Gelochelidon nilotica), formerly Sterna nilotica, is a seabird of the tern family, Sternidae. It is now considered to be in its own genus. The genus name is from Ancient Greek gelao, "to laugh", and khelidon, "swallow". The specific niloticus is from Latin and means of the Nile. 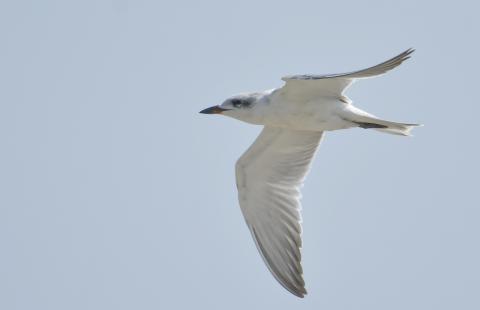 This is a fairly large and powerful tern, similar in size and general appearance to a Sandwich tern, but the short thick gull-like bill, broad wings, long legs and robust body are distinctive. The summer adult has grey upperparts, white underparts, a black cap, strong black bill and black legs. The call is a characteristic ker-wik. It is 33–42 cm (13–17 in) in length and 76–91 cm (30–36 in) in wingspan. Body mass ranges from 150–292 g (5.3–10.3 oz).

In winter, the cap is lost, and there is a dark patch through the eye like a Forster's tern or a Mediterranean gull. Juvenile gull-billed terns have a fainter mask, but otherwise look much like winter adults.

Juvenile Sandwich terns have a short bill, and are frequently mistaken for gull-billed tern where the latter species is uncommon, such as North Sea coasts.

There are six listed subspecies of the gull-billed tern:

It breeds in warmer parts of the world in southern Europe, temperate and eastern Asia, both coasts of North America, eastern South America and Australia. This bird has a number of geographical races, differing mainly in size and minor plumage details.

All forms show a post-breeding dispersal, but the northern breeders are most migratory, wintering south to Africa, the Caribbean and northern South America, southern Asia and New Zealand.

The gull-billed tern is one of the species to which the Agreement on the Conservation of African-Eurasian Migratory Waterbirds (AEWA) applies.

This species breeds in colonies on lakes, marshes and coasts. It nests in a ground scrape and lays two to five eggs. While widely distributed in freshwater areas in Eurasia, it is associated almost solely with saltwater, coastal areas in North America.

This is a somewhat atypical tern, in appearance like a Sterna tern, but with feeding habits more like the Chlidonias marsh terns, black tern and white-winged tern. It used to be grouped in the genus Sterna but is now placed on its own in the genus Gelochelidon.

The gull-billed tern does not normally plunge dive for fish like the other white terns, and has a broader diet than most other terns. It largely feeds on insects taken in flight, and also often hunts over wet fields and even in brushy areas, to take amphibians and small mammals, as well as small birds and the chicks and eggs of other terns. It is also an opportunistic feeder, and has been observed to pickup and feed on dead dragonflies from the road 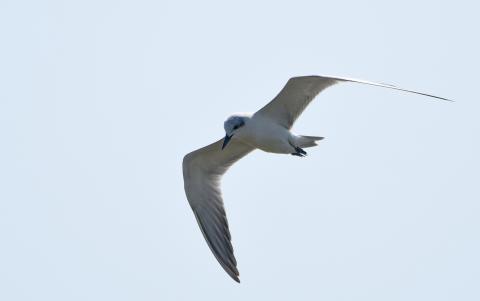