Like other vultures, it is a scavenger, feeding mostly from carcasses of dead animals which it finds by soaring over open areas, often moving in flocks. It establishes nesting colonies in cliffs that are undisturbed by humans while coverage of open areas and availability of dead animals within dozens of kilometres of these cliffs is high. It grunts and hisses at roosts or when feeding on carrion.

The maximum recorded lifespan of the griffon vulture is 41.4 years for an individual in captivity.

It breeds on crags in mountains in southern Europe, north Africa, and Asia, laying one egg. Griffon vultures may form loose colonies. The population is mostly resident. Juveniles and immature individuals may migrate far or embark on long-distance movements.

The main cause of the rapid decline in the griffon vulture population is the consumption of poisoned baits set out by people. Wildlife conservation efforts have attempted to increase awareness of the lethal consequences of using illegally poisoned baits through education about the issue.

Griffon vultures have been used as model organisms for the study of soaring and thermoregulation. The energy costs of level flight tend to be high, prompting alternatives to flapping in larger birds. Vultures in particular utilize more efficient flying methods such as soaring. Compared to other birds, which elevate their metabolic rate to upwards of 16 times their basal metabolic rate in flight, soaring griffon vultures expend about 1.43 times their basal metabolic rate in flight. Griffon vultures are also efficient flyers in their ability to return to a resting heart rate after flight within ten minutes.

As large scavengers, griffon vultures have not been observed to seek shelter for thermoregulation. Vultures use their bald heads as a means to thermoregulate in both extreme cold and hot temperatures. Changes in posture can increase bare skin exposure from 7% to 32%. This change allows for the more than doubling of convective heat loss in still air. Griffon vultures have also been found to tolerate increased body temperatures as a response to high ambient temperatures. By allowing their internal body temperature to change independently of their metabolic rate, griffon vultures minimize their loss of water and energy in thermoregulating. One study in particular (Bahat 1995) found that these adaptations have allowed the Griffon vulture to have one of the widest thermal neutral zones of any bird.

In respect to varying age ranges, the griffon vultures evidently show no difference in feeding rates. Inevitably, as resource availability increases, feeding rates tend to follow the same pattern. Upon studying the reintroduction of this species and its impact on the intraspecific competition, old adults are more inclined to display aggressive behavior and signs of dominance in comparison to the other age ranges. In terms of comparing the male and female sexes, there are no observed differences in competitive behaviors. Lastly, the reintroduced individuals of the species and the wild-bred do not differ in dominance or feeding rate despite the differences in upbringing 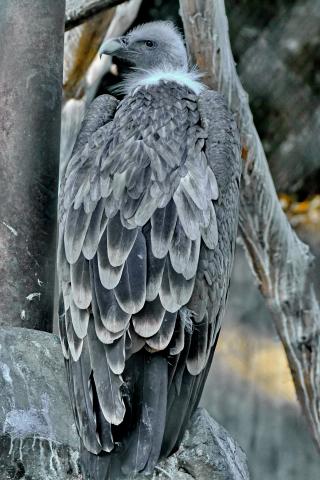