The great spotted cuckoo (Clamator glandarius) is a member of the cuckoo order of birds, the Cuculiformes, which also includes the roadrunners, the anis and the coucals. The genus name clamator is Latin for "shouter" from clamare, "to shout". The specific glandarius is derived from Latin glans, glandis, "acorn".

It is widely spread throughout Africa and the Mediterranean Basin. It is a brood parasite that lays its eggs in the nests of corvids, in particular the

This species is slightly larger than the common cuckoo at 35–39 cm (14–15 in) in length, but looks much larger with its broad wings and long narrow tail. The adult is grey above with a slender body, long tail and strong legs. It has a grey cap, grey wings, a yellowish face and upper breast, and white underparts. Sexes are similar. The juveniles have blackish upperparts and cap, and chestnut primary wing feathers. This species has a magpie-like flight.

It is a bird of warm open country with trees. Its food is insects, spiders, small reptiles and hairy caterpillars, which are distasteful to many birds, are a specialty.

The great spotted cuckoo's call is a loud cher-cher-kri-kri and variations. 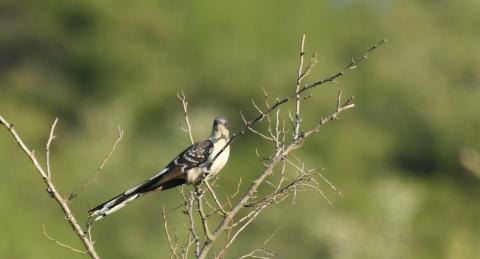