The Great Crested Grebe is 46–51 centimetres (18–20 in) long with a 59–73 centimetres (23–29 in) wingspan. It is an excellent swimmer and diver, and pursues its fish prey underwater. The adults are unmistakable in summer with head and neck decorations. In winter, this is whiter than most grebes, with white above the eye, and a pink bill. It is the largest European grebe. The young are remarkable because their heads are striped black and white, much like zebras. They lose these markings when they become adults. The Great Crested Grebe breeds in vegetated areas of freshwater lakes. The subspecies P. c. cristatus is found across Europe and Asia. It is resident in the milder west of its range, but migrates from the colder regions. It winters on freshwater lakes and reservoirs or the coast. 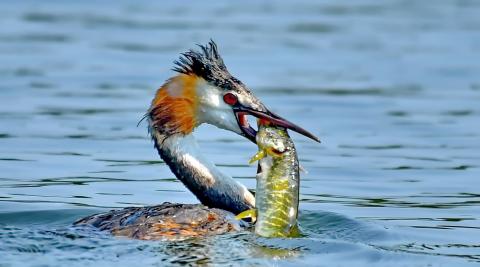 The African subspecies P. c. infuscatus and the Australasian subspecies P. c. australis are mainly sedentary. The Great Crested Grebe has an elaborate mating display. Like all grebes, it nests on the water's edge, since its legs are set relatively far back and it is thus unable to walk very well. Usually two eggs are laid, and the fluffy, striped young grebe are often carried on the adult's back. In a clutch of two or more hatchlings, male and female grebes will each identify their 'favourites', which they alone will care for and teach Unusually, young grebes are capable of swimming and diving almost at hatching. 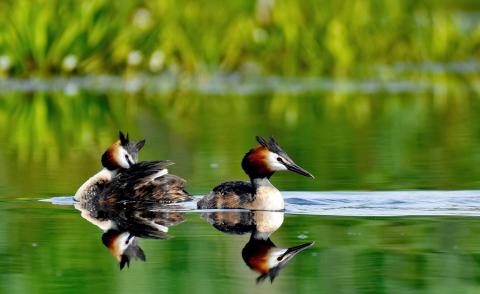 The adults teach these skills to their young by carrying them on their back and diving, leaving the chicks to float on the surface; they then re-emerge a few feet away so that the chicks may swim back onto them. The Crested Grebe feeds mainly on fish, but also little crustaceans, insects and small frogs. This species was hunted almost to extinction in the United Kingdom in the 19th century for its head plumes, which were used to decorate hats and ladies' undergarments. The RSPB was set up to help protect this species, which is again a common sight.