Very comun bird in the Danube Delta. The Great Cormorant (Phalacrocorax carbo), known as the Great Black Cormorant across the Northern Hemisphere, the Black Cormorant in Australia and the Black Shag further south in New Zealand, is a widespread member of the cormorant family of seabirds. It breeds in much of the Old World and the Atlantic coast of North America. The Great Cormorant is a large black bird, but there is a wide variation in size in the species wide range. Weight is reported from 1.5 kg (3.3 lbs) to 5.3 kg (11.7 lbs),[3] with a typical range from 2.6 to 3.7 kg (5.7-8.2 lbs). Length can vary from 70 to 102 cm (28–40 in) and wingspan from 121 to 160 cm (48–63 in). It has a longish tail and yellow throat-patch. Adults have white thigh patches in the breeding season. In European waters it can be distinguished from the Common Shag by its larger size, heavier build, thicker bill, lack of a crest and plumage without any green tinge. In eastern North America, it is similarly larger and bulkier than Double-crested Cormorant, and the latter species has more yellow on the throat and bill. This is a very common and widespread bird species. It feeds on the sea, in estuaries, and on freshwater lakes and rivers. Northern birds migrate south and winter along any coast that is well-supplied with fish. 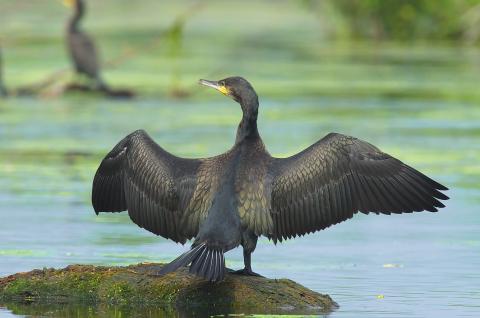 The type subspecies, P. c. carbo, is found mainly in Atlantic waters and nearby inland areas: on western European coasts and south to North Africa, the Faroe Islands, Iceland and Greenland; and on the eastern seaboard of North America, though in America it breeds only in the north of its range, in the Canadian maritime provinces. The subspecies found in Australasian waters, P. carbo novaehollandiae, has a crest. In New Zealand it is known as the Black Shag or by its Māori name; Kawau. The syntype is in the collection of the Museum of New Zealand Te Papa Tongarewa. The 80–100 cm long White-breasted Cormorant P. c. lucidus found in sub-Saharan Africa, has a white neck and breast. It is often treated as a full species, Phalacrocorax lucidus (e.g. Sibley & Monroe, 1990, Sinclair, Hockey and Tarboton, 2002) In addition to the Australasian and African forms, Phalacrocorax carbo novaehollandiae and P. carbo lucidus mentioned above, other geographically distinct subspecies are recognised, including P. c. sinensis (western Europe to east Asia), P. c. maroccanus (north-western Africa), and P. c. hannedae (Japan). Some authors treat all these as allospecies of a P. carbo superspecies group. The Great Cormorant breeds mainly on coasts, nesting on cliffs or in trees (which are eventually killed by the droppings), but also increasingly inland. 3-4 eggs are laid in a nest of seaweed or twigs. The Great Cormorant can dive to considerable depths, but often feeds in shallow water. 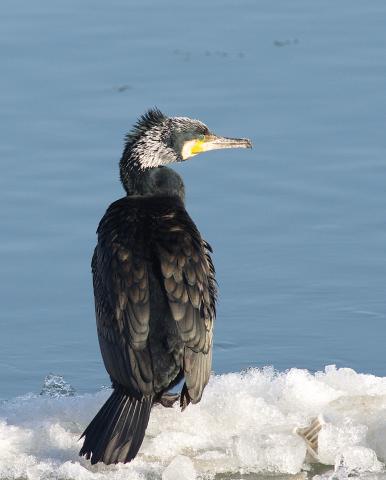 It frequently brings prey to the surface. A wide variety of fish are taken: cormorants are often noticed eating eels, but this may reflect the considerable time taken to subdue an eel and position it for swallowing, rather than any dominance of eels in the diet. In British waters, dive times of 20–30 seconds are common, with a recovery time on the surface around a third of the dive time. Many fishermen see in the Great Cormorant a competitor for fish. Because of this it was nearly hunted to extinction in the past. Thanks to conservation efforts its numbers increased. At the moment there are about 1.2 million birds in Europe (based on winter counts. Late summer counts would show higher numbers). Increasing populations have once again brought the cormorant into conflict with fisheries. For example, in Britain, where inland breeding was once uncommon, there are now increasing numbers of birds breeding inland, and many inland fish farms and fisheries now claim to be suffering high losses due to these birds. In the UK each year some licences are issued to shoot specified numbers of cormorants in order to help reduce predation, it is however still illegal to kill a bird without such a licence. Cormorant fishing is practiced in China, Japan, and elsewhere around the globe. In it, fishermen tie a line around the throats of cormorants, tight enough to prevent swallowing, and deploy them from small boats. The cormorants catch fish without being able to fully swallow them, and the fishermen are able to retrieve the fish simply by forcing open the cormorants' mouths, apparently engaging the regurgitation reflex. In Norway cormorant is a traditional game bird. Each year ca. 10,000 cormorants are shot to be eaten. In North Norway, cormorants are traditionally seen as semi-sacred.It is regarded as good luck to have cormorants gather near your village or settlement. An old legend states that people who die far out at sea, their bodies never recovered, spend eternity on the island Utrøst - which can only occasionally be found by mortals. The inhabitants of Utrøst can only visit their homes in the shape of cormorants.