The Goldcrest (Regulus regulus) is a very small passerine bird in the kinglet family. Its colourful golden crest feathers gives rise to its English and scientific names, and possibly to it being called the "king of the birds" in European folklore. Several subspecies are recognised across the very large distribution range that includes much of Eurasia and the islands of Macaronesia. Birds from the north and east of its breeding range migrate to winter further south. 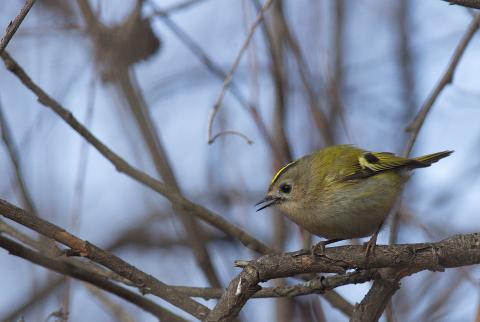 This kinglet has greenish upper-parts, whitish under-parts, and has two white wingbars. It has a plain face contrasting black irises and a bright head crest, orange and yellow in the male and yellow in the female, which is displayed during breeding. It superficially resembles the Firecrest, which largely shares its European range, but the latter's bronze shoulders and strong face pattern are distinctive. The song is a repetition of high thin notes, slightly higher-pitched than those of its relative. Birds on the Canary Islands are now separated into two subspecies of the Goldcrest, but were formerly considered to be a subspecies of the Common Firecrest or a separate species, Regulus teneriffae.

The Goldcrest breeds in coniferous woodland and gardens, building its compact, three-layered nest on a tree branch. Ten to twelve eggs are incubated by the female alone, and the chicks are fed by both parents; second broods are common. This kinglet is constantly on the move as it searches for insects to eat, and in winter it is often found with flocks of tits. It may be killed by birds of prey or carry parasites, but its large range and population mean that it is not considered to present any significant conservation concerns.

The Goldcrest is the smallest European bird, 8.5–9.5 cm (3.3–3.7 in) in length,with a 13.5–15.5 cm (5.3–6.1 in) wingspan and a weight of 4.5–7.0  g (0.16–0.25 oz). It is similar in appearance to a warbler, with olive-green upperparts, buff-white underparts, two white wing bars, and a plain face with conspicuous black irises. The crown of the head has black sides and a narrow black front, and a bright crest, yellow with an orange centre in the male, and entirely yellow in the female; the crest is erected in display, making the distinctive orange stripe of the male much more conspicuous. The small, thin bill is black, and the legs are dark flesh-brown. Apart from the crest colour, the sexes are alike, although in fresh plumage, the female may have very slightly paler upperparts and greyer underparts than the adult male. The juvenile is similar to the adult, but has duller upperparts and lacks the coloured crown. Although the tail and flight feathers may be retained into the first winter, by then the young birds are almost indistinguishable from adults in the field. The flight is distinctive; it consists of whirring wing-beats with occasional sudden changes of direction. Shorter flights while feeding are a mix of dashing and fluttering with frequent hovering. It moves restlessly among foliage, regularly creeping on branches and up and down trunks.

The Goldcrest is usually easily distinguished from other small birds in its range, but poor views could possibly lead to confusion with the Common Firecrest or Yellow-browed Warbler. The adult Common Firecrest has a distinguishing face pattern showing a bright white supercilium (eyebrow) and black eye-stripe, and the juvenile usually shows enough of this face pattern to be readily distinguished from the plain-faced Goldcrest. The Yellow-browed Warbler has a yellowish supercilium and pale crown stripe, so also shows a different head pattern. The Ruby-crowned Kinglet, an American Regulus species and a potential vagrant in Europe, could be more difficult to distinguish. It has a plain face like its Old World cousin, but the male has a red crest without any yellow or a black border. Female and juvenile Ruby-crowned Kinglets lack the ruby-red crown patch, but compared with the similarly crestless juvenile Goldcrest, the American bird is larger in size, has an obvious whitish eyering, and yellowish wing bars.

The typical contact call of the Goldcrest is a thin, high-pitched zee given at intervals of 1–4 seconds, with all the notes at the same pitch. It sometimes has a more clipped ending, or is delivered more rapidly. The call is higher and less rough than that of the Firecrest. The song of the male Goldcrest is a very high, thin double note cedar, repeated 5–7 times and ending in a flourish, cedar­cedar-cedar-cedar-cedar-stichi-see-pee. The entire song lasts 3–4 seconds and is repeated 5–7 times a minute. This song, often uttered while the male is foraging, can be heard in most months of the year. There is also a subdued rambling subsong. Male Goldcrests sometimes show a territorial response to recordings of the songs or calls of the Common Firecrest, but the reverse is apparently not true, since the songs of the Common Firecrest are simpler in construction than those of its relatives.

The songs of mainland Goldcrests vary only slightly across their range and consist of a single song type, but much more divergence has occurred in the isolated Macaronesian populations. Not only are there variations between islands and within an island, but individual males on the Azores can have up to three song types. The dialects on the Azores fall into two main groups, neither of which elicited a response from male European Goldcrests in playback experiments. There are also two main dialect groups on the Canary islands, a widespread group similar to the European version, and another which is restricted to the mountains of Tenerife. The song variations have been used to investigate the colonisation pattern of the Macaronesian islands by Goldcrests, and identified a previously unknown subspecies.

The kinglets are a small group of birds sometimes included in the Old World warblers, but frequently given family status, especially as recent research shows that despite superficial similarities, they are phylogenetically remote from the warblers. The names of the family, Regulidae, and its only genus, Regulus, are derived from the Latin regulus, a diminutive of rex, a king. The Goldcrest was first described by Linnaeus in his Systema Naturae in 1758 as Motacilla regulus (characterised as [Motacilla] remigibus secundaras exteriori margine flavis, medio albis). It was moved to the warbler genus Sylvia by English naturalist John Latham in 1790, and to its current genus by French zoologist Georges Cuvier in 1800.

The relationships of the Flamecrest or Taiwan Firecrest (Regulus goodfellowi) of Taiwan have also been a source of much debate. It is sometimes viewed as a race of Firecrest, but its territorial song resembles those of the Himalayan races of Goldcrest, and genetic data show that it is the closest relative of that species, and, despite its alternative name, only distantly related to the Firecrest. The Flamecrest diverged from the Goldcrest 3.0–3.1 mya (million years ago).

Several subspecies of the Goldcrest have been described. In continental Eurasia, there are nine generally accepted and very similar subspecies, differing only in details such as plumage shade. At the genetic level, the two Central Asian forms, R. r. sikkimensis and R. r. himalayensis, are very close to each other, and have differentiated only in the recent past, but they diverged from the western subspecies around 2.8 mya.

Differences in songs, genetics and morphology suggests that the Azores were colonised in a single invasion in the late Pleistocene, about 100,000 years ago. It is likely that the initial colonisation was of the easternmost islands, with a subsequent spread to the central and western island groups from the western caldera of São Miguel, where both eastern and western song types are found.