The Eurasian Siskin (Carduelis spinus) is a small passerine bird in the finch family Fringillidae. It is also called the European Siskin, Common Siskin or just Siskin. Other (archaic) names include Black-headed Goldfinch, barley bird and aberdevine. It is very common throughout Europe and Asia. It is found in forested areas, both coniferous and mixed woodland where it feeds on seeds of all kinds, especially of alder and conifers.

It can be distinguished from other similar finches by the color of the plumage. The upper parts are greyish green and the under parts grey-streaked white. Its wings are black with a conspicuous yellow wing bar, and the tail is black with yellow sides. The male has a mainly yellow face and breast, with a neat black cap. Female and young birds have a greyish green head and no cap. It is a trusting, sociable and active bird. The song of this bird is a pleasant mix of twitters and trills. For these reasons it is often raised in captivity.

These birds have an unusual migration pattern as every few years in winter they migrate southwards in large numbers. The reasons for this behavior are not known but may be related to climatic factors and above all the availability of food. In this way overwintering populations can thrive where food is abundant. This small finch is an acrobatic feeder, often hanging upside-down like a tit. It will visit garden bird feeding stations.

The Siskin was first was described by Linnaeus in 1758 as Fringilla spinus, in the 10th edition of Systema naturae. In 1760, Brisson described the genus Carduelis, where this species would finally be placed.

Despite being found across a wide area it is a monotypic species, that is, there are no distinct subspecies. This could be explained by a number of factors, such as spatial variability of individuals in breeding areas between years, the large overwintering area which supposes a constant genetic interchange, and females having a number of clutches of eggs in one breeding season, each in a different place.[6]

The phylogeny has been obtained by Antonio Arnaiz-Villena et al. 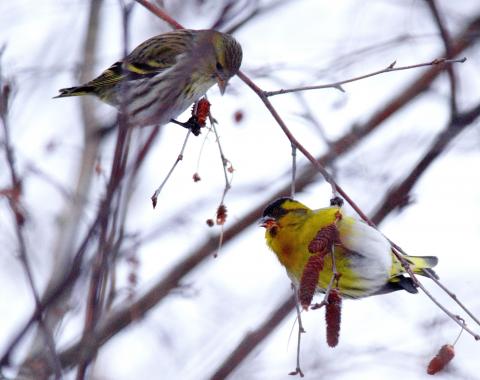 This bird may have reached America either from Asia or from Europe (Greenland/Iceland). It is the extant parental species of one of the Spinus/Carduelis three evolutive North American radiations of atriceps, pinus and dominicenses finches. It has been recorded both in the Aleutian Islands and the East: the Labrador Peninsula and St. Lawrence River mouth (Canada). This raises the possibility that this bird entered (or may still try to enter) America through Greenland/Iceland from Western Europe.

The Siskin is a small, short-tailed bird, 11–12.5 centimetres (4.3–4.92 in) in length with a wingspan that ranges from 20–23 centimetres (7.9–9.1 in). It weighs between 10–18 grams (0.35–0.63 oz). The amount of black on the bib is very variable between males and the size of the bib has been related to dominance within a flock. The plumage of the female is more olive-coloured than the male. The cap and the auriculas are greenish with a white bib and a rump that is a slightly striped whitish yellow. The young have a similar colouration to the females, with drab colours and a more subdued plumage

The shape of the Siskin's beak is determined by its feeding habits. It is strong although it is also slender in order to pick up the seeds on which they feed. The legs and feet are dark brown and the eyes are black.

It has a rapid and bounding flight pattern that is similar to other finches.

This species can be found across the greater part of Eurasia and the north of Africa. Its breeding area is separated into two zones, each side of the Palearctic ecozone: the east coast of Asia and the central and northern part of Europe.

These birds can be found throughout the year in Central Europe and some mountain ranges in the south of the continent. They are present in the north of Scandinavia and in Russia and they over-winter in the Mediterranean basin and the area around the Black Sea. In China they breed in the Khingan Mountains of Inner Mongolia and in Jiangsu province; they spend summer in Tibet, Taiwan, the valleys of the lower Yangtse River and the south east coast.

The Eurasian Siskin is occasionally seen in North America. There is also a similar and closely related North America counterpart, the Pine Siskin, Carduelis pinus.

Their seasonal distribution is also marked by the fact that they follow an anomalous migration pattern. Every few years they migrate southwards in larger numbers and the overwintering populations in the Iberian Peninsula are greatly augmented. This event has been the object of diverse theories, one theory suggests that it occurs in the years when Norway Spruce produces abundant fruit in the centre and north of Europe, causing populations to increase. An alternative theory is that greater migration occurs when the preferred food of alder or birch seed fails. This species will form large flocks outside the breeding season, often mixed with redpolls.

It is a bird that does not remain for long in one area but which varies the areas it used for breeding, feeding, over-wintering from one year to the next.

Its habitat is forested areas at a particular altitude on a mountain side and they have a certain predilection for humid areas.Coniferous woodland, especially Spruce, is favoured for breeding. It builds its nest in a tree, laying 2–6 eggs. The British range of this once local breeder has expanded greatly due to an increase in commercial conifer plantations. The Siskin also breeds in mixed woodland; while in winter they prefer stubble and crops and areas containing trees with seeds.

They are very active and restless birds. They are also very social, forming small cohesive flocks especially in autumn and winter. They are fairly trusting of humans, it being possible to observe them from a short distance. During the breeding season, however, they are much more timid, solitary and difficult to observe. For this reason there is a German legend which says that Siskins guard a magic stone in their nests that makes them invisible. It is one of the few species which has been described as exhibiting "allofeeding"' behavior, this is where subordinates (of the same sex) regurgitate food for the dominant members of the group, which creates a strong cohesion in the flocks and implies a hierarchical structure within the group.

The Siskin is mainly a granivore although it varies its diet depending on the season. It feeds in trees avoiding eating on the ground.

In autumn and winter its diet is based on the seeds of deciduous trees such as birch and above all alder. They also visit cultivated areas and pasture where they join with other finches in eating the seeds of various Compositae such as thistles, dandelions, Artemisia, knapweeds and other herbaceous plants such as St. John's wort, meadowsweet and sorrel.

In spring, during the breeding season, they are found in coniferous forests. At this time their feeding is based on the seeds of these trees, especially on trees belonging to the genera Abies, Picea and Larix. They also feed on elms and poplars. When feeding the young they eat more insects, mainly beetles, as the proteins they contain help the chicks to grow. In summer their feeding is more varied, adding other herbaceous plants to their diet of conifer seeds: goosefoots and other Compositae.

Pairs are generally formed during the winter period before migration. The males compete aggressively for the females. As part of the courtship the male plumps up the feathers of the pileus and rump, making itself bigger, extending the tail and singing repeatedly. They also make mating flights from tree to tree, although they are not as eye-catching as the flights of the other finches. They construct a nest that is generally located at the end of a relatively high branch in a conifer, such that the nest is reasonably hidden and difficult to see. On the Iberian Peninsula they make their nests in afirs, Scotch Pine and Corsican Pine. They form small colonies of up to six pairs with the nests located near to each other. The nest is small and bowl-shaped. It is made from small twigs, dried grasses, moss and lichen and lined with down.

The first brood is born in mid-April. The female lays between 2 and 6 eggs. The eggs are white or light grey or light blue, with small brown spots and they are approximately 16.5mm by 12mm in size. Incubation takes between 10 and 14 days and is carried out entirely by the female. The chicks are altricial and nidicolous. They leave the nest after 15 days in a semi-feathered condition. They then remain close to the nest area for up to a month when, with their plumage now complete, they disperse. The Siskin usually has a second brood, from the middle of June up to the middle of July.

This bird has two calls, both powerful but conflicting, one is descending and the other is ascending, their onomatopoeic sounds can be represented as "tilu" and "tluih". On occasions they also issue a harsh rattling chirrup.

The song is similar to the other finches, a smooth and rapid twitter and trill with a long duration and which is occasionally interrupted by a stronger of shorter syllable. Siskins sing throughout the year and often in groups.

Like many of the finches the Siskin is valued by aviculturalists as a domestic bird for its song and appearance. They do not require specific care and adapt well to captivity, although they do not breed well in captivity. There are no specific diseases that affect the species, although they can show certain intestinal pathologies associated with a poor diet. They live for between 11 and 14 years, in sharp contrast to the 2 or 3 years it is estimated they live in the wild.

They form hybrids with some other finches (for example canaries) giving rise to intermediate species. Hybridisation also occurs in nature without human intervention. In some areas individuals that are found are the result of escapes or releases of captive birds.

Poland, Gibraltar, Benin and Belgium have all issued postage stamps bearing the image of the Siskin.

In Saint Petersburg there is a statue of a Siskin, as its colours are the same as the uniform worn by the students at an elite school in the city. These students have come to be known by the sobriquet Siskin, Russian: Чиж. This term was popularised in the Russian children's song Chizhik-Pyzhik. The siskin is also recognised as the official finch of the British Royal Family.