The Egyptian goose (Alopochen aegyptiaca) is a member of the duck, goose, and swan family Anatidae. It is native to Africa south of the Sahara and the Nile Valley.

Egyptian geese were considered sacred by the Ancient Egyptians, and appeared in much of their artwork. They have been raised for food and extensively bred in parts of Africa since they were domesticated by the ancient Egyptians. Because of their popularity chiefly as an ornamental bird, escapees are common and small feral populations have become established in Western Europe.

The Egyptian goose is believed to be most closely related to the shelducks (genus Tadorna) and their relatives, and is placed with them in the subfamily Tadorninae. It is the only extant member of the genus Alopochen, which also contains closely related prehistoric and recently extinct species. mtDNA cytochrome b sequence data suggest that the relationships of Alopochen to Tadorna need further investigation.

The generic name is based on Greek ἀλώπηξ (alōpēx), "fox", and χήν (chēn) "goose", referring to the ruddy colour of its back. The species name aegyptius is from the Latin Aegyptius, "Egyptian".

The sexes of this species are identical in plumage but the males average slightly larger. There is a fair amount of variation in plumage tone, with some birds greyer and others browner, but this is not sex- or age-related. A large part of the wings of mature birds is white, but in repose the white is hidden by the wing coverts. When it is aroused, either in alarm or aggression, the white begins to show. In flight or when the wings are fully spread in aggression, the white is conspicuous.

The voices and vocalisations of the sexes differ, the male having a hoarse, subdued duck-like quack which seldom sounds unless it is aroused. The male Egyptian goose attracts its mate with an elaborate, noisy courtship display that includes honking, neck stretching and feather displays. The female has a far noisier raucous quack that frequently sounds in aggression and almost incessantly at the slightest disturbance when tending her young.

This species breeds widely in Africa except in deserts and dense forests, and is locally abundant. They are found mostly in the Nile Valley and south of the Sahara. While not breeding, it disperses somewhat, sometimes making longer migrations northwards into arid regions of the Sahel. It has also been introduced elsewhere: Great Britain, the Netherlands, France, and Germany have self-sustaining populations which are mostly derived from escaped ornamental birds.] Escapes have also bred on occasion in other places, such as Texas, Florida and New Zealand. The British population dates back to the 18th century, though only formally added to the British list in 1971. In Britain, it is found mainly in East Anglia, where it breeds at sites with open water, short grass and suitable nesting locations (either islands, holes in old trees or amongst epicormic shoots on old trees).During the winter they are widely dispersed within river valleys where they feed on short grass and cereals It was officially declared a pest in the United Kingdom in 2009.

This is a largely terrestrial species, which will also perch readily on trees and buildings. Egyptian geese typically eat seeds, leaves, grasses, and plant stems. Occasionally, they will eat locusts, worms, or other small animals.

Both sexes are aggressively territorial towards their own species when breeding and frequently pursue intruders into the air, attacking them in aerial "dogfights". Egyptian geese have been observed attacking aerial objects such as drones that enter their habitat as well. Neighbouring pairs may even kill another's offspring for their own offsprings' survival as well as for more resources.

This species will nest in a large variety of situations, especially in holes in mature trees in parkland. The female builds the nest from reeds, leaves and grass, and both parents take turns incubating eggs. Egyptian geese usually pair for life. Both the male and female care for the offspring until they are old enough to care for themselves. 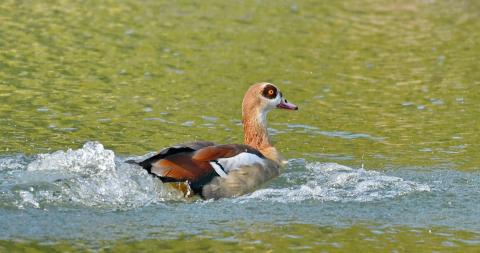 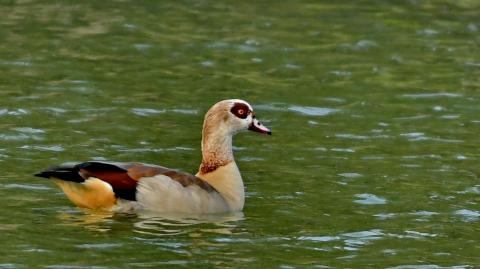