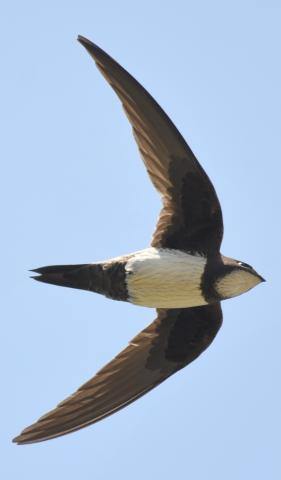 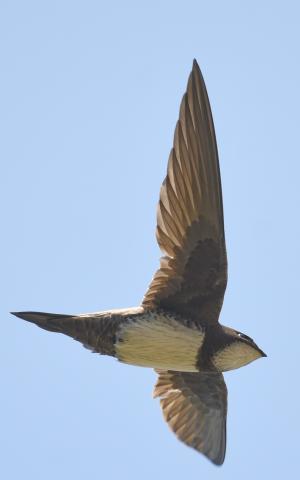 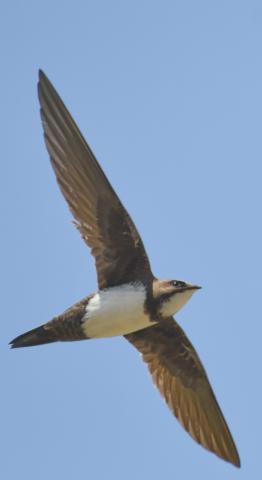 The Alpine swift (Tachymarptis melba) formerly Apus melba, is a species of swift. The genus name is from the Ancient Greek takhus, "fast", and marptis, "seizer". The specific melba has no known explanation.

Alpine swifts breed in mountains from southern Europe to the Himalaya. Like common swifts, they are strongly migratory, and winter much further south in southern Africa.

Swifts have very short legs which are used for clinging to vertical surfaces. They never settle voluntarily on the ground, spending most of their lives in the air living on the insects they catch in their beaks. Alpine swift are able to stay aloft in the air for up to seven months at a time, even drinking water "on the wing".

The bird is superficially similar to a large barn swallow or house martin. It is, however, completely unrelated to those passerine species, since swifts are in the order Apodiformes. The resemblances between the groups are due to convergent evolution, reflecting similar life styles.

Swifts have very short legs which they use only for clinging to vertical surfaces. The scientific name Apodidae comes from the Ancient Greek απους, apous, meaning "without feet". They never settle voluntarily on the ground.

Alpine swifts breed in mountains from southern Europe to the Himalaya. Like common swifts, they are strongly migratory, and winter much further south in southern Africa. They wander widely on migration, and are regularly seen in much of southern Europe and Asia. The species seems to have been much more widespread during the last ice age, with a large colony breeding, for example in the Late Pleistocene Cave No 16, Bulgaria, around 18,000–40,000 years ago. The same situation has been found for Komarowa Cave near Częstochowa, Poland during a period about 20,000–40,000 years ago.[4]

These apodiformes build their nests in colonies in a suitable cliff hole or cave, laying two or three eggs. Swifts will return to the same sites year after year, rebuilding their nests when necessary, and pairing for life. Young swifts in the nest can drop their body temperature and become torpid if bad weather prevents their parents from catching insects nearby. They have adapted well to urban conditions, frequently nesting in old buildings in towns around the Mediterranean, where large, low-flying flocks are a familiar feature in summer. Alpine swifts have a short forked tail and very long swept-back wings that resemble a crescent or a boomerang but may (as in the image) be held stretched straight out. Their flight is slower and more powerful than that of their smaller relatives, with a call that is a drawn-out twittering (listen at right).

Alpine swifts are readily distinguished from the common swifts by their larger size and their white belly and throat. They are around twice as big as most other swifts in their range, about 20 to 23 cm (7.9 to 9.1 in) in length, with a wingspan of 57 cm (22 in) and a weight of around 100 g (3.5 oz).By comparison, the common swift has a wingspan of around 42 cm (17 in). They're largely dark brown in colour with a dark neck band that separates the white throat from the white belly. Juveniles are similar to adults, but their feathers are pale edged.

Life on the wing

Alpine swifts spend most of their lives in the air, living on the insects they catch in their beaks. They drink on the wing, but roost on vertical cliffs or walls. A study published in 2013 showed Alpine swifts can spend over six months flying without having to land. All vital physiological processes, including sleep, can be performed while on air.

In 2011, Felix Liechti and his colleagues at the Swiss Ornithological Institute attached electronic tags that log movement to six alpine swifts and it was discovered that the birds could stay aloft in the air for more than 200 days straight.