The Dalmatian Pelican (Pelecanus crispus) is a member of the pelican family. It breeds from southeastern Europe to India and China in swamps and shallow lakes. The nest is a crude heap of vegetation. This is the largest of the pelicans, averaging 160–180 cm (63-70 inches) in length, 11–15 kg (24-33 lbs) in weight and just over 3 m (10 ft) in wingspan.[1] With a mean weight of 11.5 kg (25 lb), it is the world's heaviest flying bird species on average although large male bustards and swans can exceed the pelican in maximum weight.It differs from the Great White Pelican in that it has curly nape feathers, grey legs and greyish-white (rather than pure white) plumage. It has a red lower mandible in the breeding season. Immatures are grey and lack the pink facial patch of immature White Pelicans. 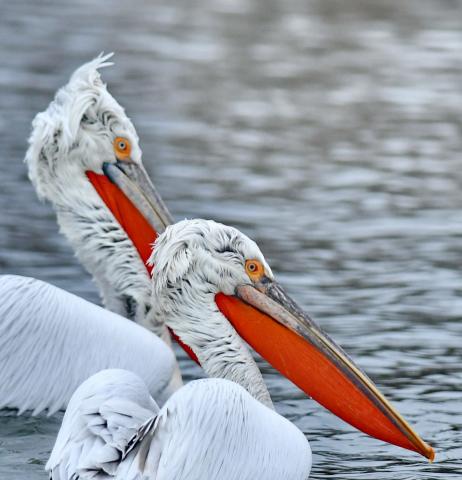 The latter also has darker flight feathers. This pelican migrates short distances. In flight, it is an elegant soaring bird, with the flock moving in synchrony. The neck is then held back like a heron's. This pelican feeds mainly on fish, which it scoops along with great masses of water out of the surface of the water. Other small wetlands-dwellers may supplement the diet, including crustaceans and small birds. In the Danube Delta we estimate 400 ex. and normaly we could see that bird without problem. Like the White Pelican, this species has declined greatly through habitat loss and persecution[clarification needed]. As of 1994, there are around 1,000 breeding pairs in Europe, most of them in Ukraine, Russia, Greece, Romania, Bulgaria and Albania (Karavasta Lagoon). The Dalmatian Pelican is one of the species to which the Agreement on the Conservation of African-Eurasian Migratory Waterbirds (AEWA) applies. No subspecies are known to exist over its wide range, but based on size differences, a Pleistocene paleosubspecies Pelecanus crispus palaeocrispus has been described from fossils recovered at Binagady, Azerbaijan.