The common quail (Coturnix coturnix) is a small ground-nesting game bird in the pheasant family Phasianidae. Coturnix is the Latin for this species.

With its characteristic call of "wet my lips", this species of quail is more often heard than seen. It is widespread in Europe and North Africa, and is categorised by the IUCN as "least concern". It should not be confused with the domesticated Japanese quail, Coturnix japonica, native to Asia, which, although visually similar, has a very distinct call. 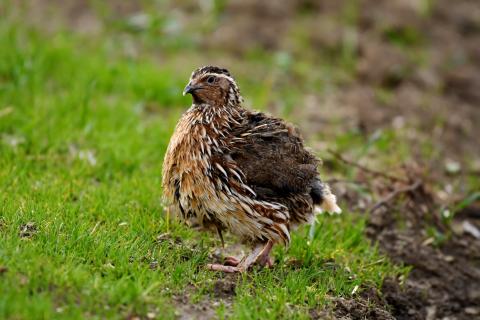 This is a terrestrial species, feeding on seeds and insects on the ground. It is notoriously difficult to see, keeping hidden in crops, and reluctant to fly, preferring to creep away instead. Even when flushed, it keeps low and soon drops back into cover. Often the only indication of its presence is the distinctive "wet-my-lips" repetitive song of the male. The call is uttered mostly in the mornings, evenings and sometimes at night. It is a strongly migratory bird, unlike most game birds.

Upon attaining an age of 6–8 weeks, this quail breeds on open arable farmland and grassland across most of Europe and Asia, laying 6-12 eggs in a ground nest. The eggs take from 16–18 days to hatch.

This species was first described by Linnaeus in his Systema naturae in 1758 as Tetrao coturnix. The Eurasian race, C. c. coturnix, overwinters southwards in Africa's Sahel and India. The populations on Madeira and the Canary Islands belong to the nominate race. The African race, C. c. africana, described by Temminck and Schlegel, in 1849, is known as the African quail. It overwinters within Africa, some moving northwards from South Africa. The common quails of Madagascar and the Comoros belong to the same African race, although those found around Ethiopia make up a different subspecies, the Abyssinian quail, C. c. erlangeri (Zedlitz, 1912). The fairly numerous population of the Cape Verde islands, belong to a separate race, C. c. inopinata, (described by Hartert in 1917), while those on the Azores belong to race C. c. conturbans (Hartert, 1920)

Exodus 16:1-13 relates how the migrating Israelites asked God for meat and were provided with a massive flock of migrating quail. It is still heavily hunted as game on passage through the Mediterranean area. This species over recent years has seen an increase in its propagation in the United States and Europe. However, most of this increase is with hobbyists.

In 1537, Queen Jane Seymour, third wife of Henry VIII, pregnant with the future King Edward VI, developed an insatiable craving for quail, and courtiers and diplomats abroad were ordered to find sufficient supplies for the Queen.

If they have eaten certain plants, although which plants is still in debate, the meat from quail can be poisonous, with one in four who consume poisonous flesh becoming ill with coturnism, which is characterized by muscle soreness, and which may lead to kidney failure.