The Common Moorhen (Gallinula chloropus) is a bird in the Rallidae family with an almost worldwide distribution. The North and South American Committees of the AOU and the IOC have voted on or before July 2011 to split the American forms into a new species Common Gallinule, however, no other committee has voted to change taxonomy yet. In that light, the American forms can now be found under a separate species listing Common Gallinule, however all forms can still be found here until further actions are taken. It lives around well-vegetated marshes, ponds, canals and other wetlands. The species is not found in the polar regions, or many tropical rainforests. But elsewhere the Common Moorhen is likely the most commonly seen rail species to most people, excepting the Eurasian Coot or American Coot in some regions.

The name mor-hen has been recorded in English since the 13th century, and the word moor here is an old sense meaning marsh[2] - the species is not usually found in moorland. An older alternative name, Common Waterhen, is a more descriptive because of the bird's habitat.

A "Watercock" is not a male "Waterhen", but the rail species Gallicrex cinerea, not especially closely related to the Common Moorhen. "Water Rail" usually refers to Rallus aquaticus, again not closely related.

The Moorhen is a distinctive species, with dark plumage apart from the white undertail, yellow legs and a red facial shield. The young are browner and lack the red shield. It has a wide range of gargling calls and will emit loud hisses when threatened. 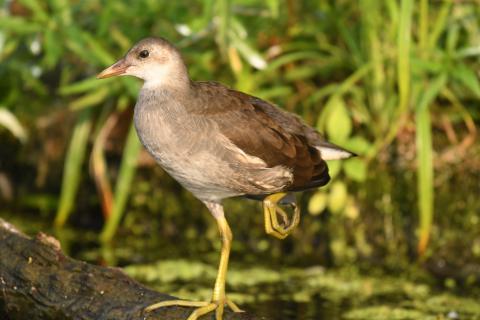 This is a common breeding bird in marsh environments and well-vegetated lakes. Populations in areas where the waters freeze, such as southern Canada, the northern USA and eastern Europe, will migrate to more temperate climes. This species will consume a wide variety of vegetable material and small aquatic creatures. They forage beside or in the water, sometimes upending in the water to feed. It is often secretive, but can become tame in some areas. Despite loss of habitat in parts of its range, the Common Moorhen remains plentiful and widespread. They fight over territories and also hop around Lily pads.

The nest is a basket built on the ground in dense vegetation. Laying starts in spring, between mid-March and mid-May in N hemisphere temperate regions. About 8 eggs are usually laid per female early in the season; a brood later in the year usually has only 5-8 or even less eggs. Nests may be re-used by different females. Incubation lasts about three weeks. Both parents incubate and feed the young. These fledge after 40–50 days, become independent usually a few weeks thereafter, and may raise their first brood the next spring. When threatened, the young may cling to the parents' body, after which the adult birds fly away to safety, carrying their offspring with them.

Despite being an abundant and widespread species, small populations are more prone to extinction. The Hawaiian Moorhen or ʻalae ʻula (G. c. sandvicensis) is suspected to be threatened by the Small Indian Mongoose (Herpestes javanicus) which was introduced to the Hawaiian Islands to hunt rats but found the local birdlife easier prey. The Mariana Common Moorhen or pulattat (G. c. guami) is very rare nowadays due to destruction of habitat. Only some 300 adult birds remained in 2001, and it is listed as Endangered both federally (since 1984) and locally.

The population of Palau, belonging to the widespread subspecies G. c. orientalis and locally known as debar (a generic term also used for ducks and meaning roughly "waterfowl"), is also very rare, and apparently the birds are hunted by locals. Most of the population on the archipelago occurs on Angaur and Peleliu, while the species is probably already gone from Koror. In the Lake Ngardok wetlands of Babeldaob, a few dozen still occur, but the total number of Common Moorhens on Palau is about in the same region as the Guam population; less than 100 adult birds (usually less than 50) have been encountered in any survey. 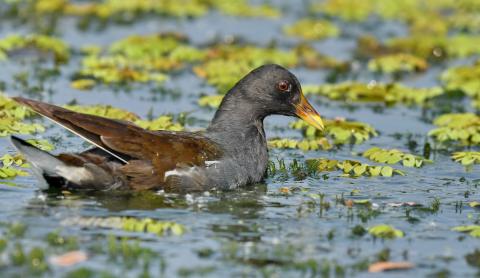 On a global scale – all subspecies taken together –, the Common Moorhen is as abundant as its vernacular name implies. It is therefore considered a species of Least Concern by the IUCN.

The Common Moorhen is one of the birds (the other is the Eurasian Coot, Fulica atra) from which the cyclocoelid flatworm parasite Cyclocoelum mutabile was first described. This species is parasitised by the moorhen flea, Dasypsyllus gallinulae.

About one dozen subspecies are today considered valid; several more have been described which are now considered junior synonyms. Most are not very readily recognizable as differences are rather subtle and often clinal. Usually, the location of a sighting is the most reliable indication as to subspecies identification, but the migratory tendencies of this species make identifications based on location not completely reliable. Old World birds have a frontal shield with rounded top and fairly parallel sides; the tailward margin of the red unfeathered area is a smooth waving line. American birds have a frontal shield that has a fairly straight top and is less wide towards the bill, giving a marked indentation to the back margin of the red area.

In addition to the extant subspecies listed below, there are two Pleistocene populations known from fossils; they were distinct (generally larger) birds and probably the direct ancestors of some of today's Common Moorhens: The stout and long-winged paleosubspecies G. c. brodkorbi is known from the Ichetucknee River deposits in Florida; it was originally described as a distinct species. The presence of fossils typical of the shorter-winged and more delicate G. c. cerceris in the same deposits suggests that brodkorbi was not ancestral to the "Florida Gallinule" of our time but rather to the more northernly "Common Gallinule". An undescribed form is recorded from the Early Pleistocene of Dursunlu in Turkey.