The Common Chaffinch (Fringilla coelebs), also called by a wide variety of other names, is a small passerine bird in the finch family Fringillidae.

The Common Chaffinch's large double white wing bars, white tail edges and greenish rump easily identify this 14–16 cm long species. The breeding male is unmistakable, with his reddish underparts and a blue-grey cap. The female is drabber and greener, but still obvious.

The name chaffinch comes from Old English ceaffinc, literally "chaff finch", and is the source of the nickname chaffy or chaffie.The bird is so named for its tendency to peck the grain left out in farmyards, a habit which has also garnered it the names wheatbird and wheatsel-bird or wheatsel bird (from "wheatsel", a rare word meaning wheat drilling), the latter used primarily of male chaffinches (or "cock-chaffinches"). The names scobby, cobby, scoppy, and scop refer to this pecking ("scop" is a Cumbrian word meaning to hit). 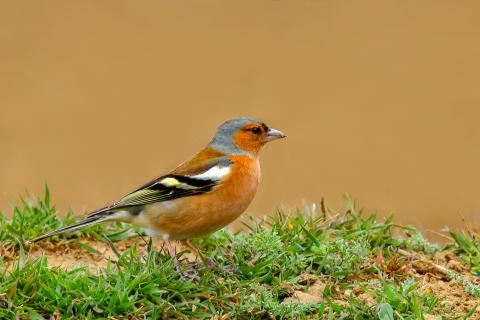 Spink and the less common names pink, pinkie, and pinkety are of the same Proto-Indo-European origin as finch (confer Greek spiza, chaffinch, and French pinson, finch), and are possibly imitative of the bird's song. This unique call has inspired the names twink, tweet, weet-weet, chink chink, chink chaffey, and pink twink. Popular belief holds that the chaffinch's song foretells rain, leading to the name wetbird.

This bird is widespread and very familiar throughout Europe. It is the most common finch in western Europe, and the second most common bird in the British Isles. Its range extends into western Asia, northwestern Africa, and Macaronesia, where it has many distinctive island forms. In the Canary Islands of Tenerife and Gran Canaria, the Common Chaffinch has colonised twice, giving rise to the endemic species known as the Blue Chaffinch and a distinctive subspecies. In each of the Azores, in Madeira, and in the rest of the Canaries there is a single species on each island.

It was introduced from Britain into a number of its overseas territories in the 18th and 19th centuries. In New Zealand it is a common species. In South Africa a very small breeding colony in the suburbs of Constantia, Hout Bay and Camps Bay near Cape Town is the only remnant of one such introduction.

It uses a range of habitats, but open woodland is favoured, although it is common in gardens and on farmland. 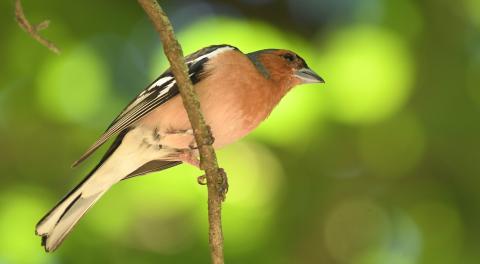 Many subspecies of the Common Chaffinch have been described, though not all are always concurrently accepted.They include:

Subspecies of the Macaronesian radiation: