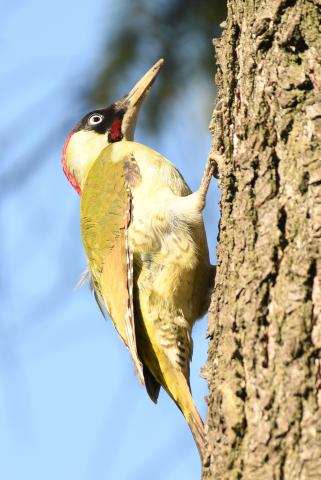 The European green woodpecker (Picus viridis) is a member of the woodpecker family Picidae. There are four subspecies and it occurs in most parts of Europe and in western Asia. All have green upperparts, paler yellowish underparts, a red crown and moustachial stripe which has a red centre in males but is all black in females.

The European green woodpecker spends much of its time feeding on ants on the ground and does not often 'drum' on trees like other woodpecker species. It is a shy bird but usually draws attention with its loud calls. A nest hole is excavated in a tree; four to six eggs are laid which hatch after 19–20 days.

The European green woodpecker measures 30–36 cm in length with a 45–51 cm wingspan. Both sexes are green above and pale yellowish green below, with yellow rump and red crown and nape; the moustachial stripe has a red centre in the male but is solid black in the female. The lores and around the white eye are black in both male and female, except in the Iberian race P. v. subsp. sharpei, in which it is dark grey and males have only a lower black border to the moustache. Juveniles are spotty and streaked all over the moustache is dark initially, though juvenile males can show some red feathers by early June or usually by July or August.

Moult takes place between June and November with the first flight feathers being lost around the time the young fledge. Juveniles moult quickly after fledging and gain their adult plumage between August and November.

Although the European green woodpecker is shy and wary, it is usually its loud calls, known as yaffling, which first draw attention. It 'drums' rarely (a soft, fast roll), but often gives a noisy kyü-kyü-kyück while flying. The song is a loud series of 10-18 'klü' sounds which gets slightly faster towards the end and falls slightly in pitch. The female makes a thinner pü-pü-pü-pü-pü-pü-pü. The flight is undulating, with 3–4 wingbeats followed by a short glide when the wings are held by the body.

It can be distinguished from the similar, but smaller, grey-headed woodpecker by its yellowish, not grey, underparts, and the black lores and facial 'mask'. In Europe, its green upperparts and yellow rump can lead to confusion with the grey-headed woodpecker or possibly the female golden oriole, though the latter is smaller and more slender with narrower wings and longer tail. The closely related, very similar Levaillant's woodpecker occurs only in north-west Africa.

The European green woodpecker is a member of the order Piciformes, the woodpecker family Picidae and the genus Picus. It was first described by Linnaeus in 1758. The scientific name is derived from the Greek pikos, meaning 'woodpecker', and Latin viridis, 'green'. There are four subspecies with subtle and mostly clinal differences between them.

In a recent study based on mitochondrial DNA analysis of subspecies by Perktaş, Barrowclough and Groth, it has been proposed to split this species into three distinct species: P. viridis (Linnaeus, 1758) and P. innominatus (Sarudny & Loudon, 1905). The Iberian green woodpecker, (P. sharpei), has been split by some taxonomists including the IOC.

More than 75% of the range of the European green woodpecker is in Europe, where it is absent from some northern and eastern parts and from Ireland, Greenland and the Macaronesian Islands, but otherwise distributed widely. Over half of the European population is thought to be in France, Spain and Germany, with substantial numbers also in Portugal, the United Kingdom, Sweden, Russia, Croatia, Romania and Bulgaria.It also occurs in western Asia.

The European green woodpecker has a large range and an Estimated Global Extent of Occurrence of between 1 million to 10 million square kilometres, and a population in the region of 920,000 to 2.9 million birds. Populations appear to be stable, so the species is considered of Least Concern. The species is highly sedentary and individuals rarely move more than around 500 m between breeding seasons.

A combination of old deciduous trees for nesting, and nearby feeding grounds with plenty of ants, is essential. This is usually found in semi-open landscapes with small woodlands, hedges, scattered old trees, edges of forests and floodplain forests. Suitable habitats for foraging include grassland, heaths, plantations, orchards and lawns.

The nesting hole is larger but similar to those of the other woodpeckers. It may be a few feet above the ground or at the top of a tall tree; oaks, beeches, willows and fruit trees are the preferred nest trees in western and central Europe, and aspens in the north. The hole may be excavated in sound or rotten wood, with an entrance hole of 60 mm × 75 mm. The cavity inside may be 150 mm wide and up to 400 mm deep and the work is performed mostly by the male over 15–30 days. Some tree holes are used for breeding for more than 10 years, but not necessarily by the same pair.

There is a single brood of four to six white eggs, measuring 31 × 23 mm and weighing 8.9 g each, of which 7% is shell. After the last egg is laid, they are incubated for 19–20 days by both parents taking shifts of between 1.5 and 2.5 hours. The chicks are naked and altricial at hatching and fledge after 21–24 days.

The main food of the European green woodpecker is ants of the genera Lasius and Formica for which it spends much of its time foraging on the ground, though other insects and small reptiles are also taken occasionally. The bird's distinctive, elongated, cylindrical droppings often consist entirely of ant remains. At ant nests, it probes into the ground and licks up adult ants and their larvae. They have tongues that wrap to the back of their head. Green woodpeckers will often forage in short grazed or mown permanent grasslands where the availability of ant nests is high.

The beak is relatively weak and used for pecking in soft wood only. In common with other woodpecker species, the green woodpecker's tongue is long (10 cm) and has to be curled around its skull. It lacks the barbs of the Dendrocopos woodpeckers and black woodpecker, but is made sticky by secretions from the enlarged salivary glands. Heavy, prolonged snow cover makes feeding difficult for the green woodpecker and can result in high mortality, from which it may take 10 years for the population to recover. Ant nests can be located under the snow; one bird was observed to dig 85 cm to reach a nest.

'Professor Yaffle', the wooden bookend character in the 1974 children's animation series Bagpuss, was based loosely upon the green woodpecker.'Yaffle' was among many English folk names for the European green woodpecker relating to its laughing call; others include laughing Betsey, yaffingale, yappingale and Jack Eikle. Other names, including rain-bird, weather cock and wet bird, suggest its supposed ability to bring on rain. Other names include nickle, and nicker pecker. The species has been the subject of postage stamps from several countries. The European green woodpecker is associated with Woodpecker Cider, an image of the bird is used on the merchandise. 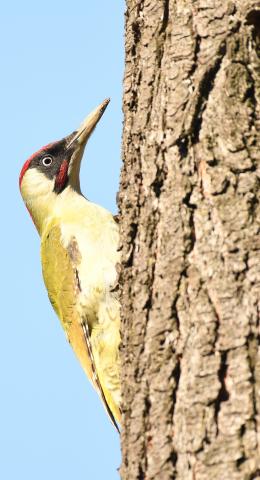