Cetti's warbler /ˈtʃɛti/, Cettia cetti, is an Old World warbler. It is a small, brown bush-warbler which breeds in southern and central Europe north-west Africa and east southern temperate Asia as far as Afghanistan and north-west Pakistan. The bird is named after the 18th century Italian zoologist, Francesco Cetti. This species is very difficult to see because of its skulking habits. 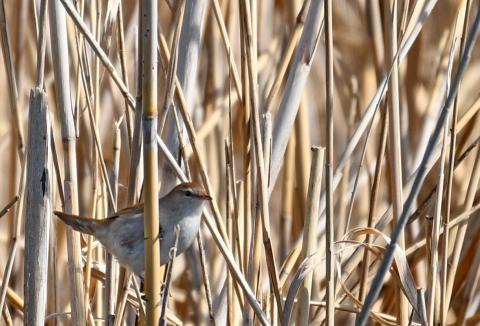 The Cetti’s warbler is approximately 13–14 cm (5.1–5.5 in) from bill to tail. The male weighs 15 g (0.53 oz) and the female 12 g (0.42 oz). Cetti’s warblers have a rounded head with a narrow pale grey stripe arching over conspicuous black eyes, and short, rounded wings. They are a rich chestnut or dark reddish-brown colour on the upperparts. They are pale grey on the throat and stomach, with a longer and broader tail than many other warblers.[citation needed] Both sexes looks alike, but males are 26% to 32% heavier than females with a wing-length 11.2% to 13.% longer. The male has a wing longer than 60 mm; the female has a wing shorter than 55 mm. The birds can be aged by their plumage; juveniles look similar to adults but have fresh plumage and two dark or dark grey spots on the tongue. Cetti's warbler is unusual among passerine birds in having ten tail feathers (rectrices) rather than the usual twelve.

Cetti's warblers signal their presence with loud song. During the summer, the males spend most of their time establishing their territories. While doing this, they spend little amount of time caring for the eggs or young. Afterwards, the males usually attract more than one female to their territory.Their song plays an important role. Cetti's warbler songs are distinct, come in loud bursts, and have a unique structure that allows them to avoid mating with other species.

The Cetti's warbler usually inhabits damp areas including ponds, lakes, marshes and rivers. It is insectivorous. They prey on arthropods such as small, soft-bodied insects and larvae. Cetti's warblers prefer tiny insects because they can digest them faster.