Caspian gull is a name applied to the gull taxon Larus cachinnans, a member of the herring gull/lesser black-backed gull complex.

First-winter birds have a pale head with dark streaking on the back of the neck. The underparts are pale and the back is greyish. The greater and median wing-coverts have whitish tips forming two pale lines across the wing.

The Caspian gull breeds around the Black and Caspian Seas, extending eastwards across Central Asia to north-west China. In Europe it has been spreading north and west and now breeds in Poland and eastern Germany. Some birds migrate south as far as the Red Sea and Persian Gulf while others disperse into Western Europe, in countries such as Sweden, Norway and Denmark. Small numbers are now seen regularly in Britain, especially in South-east England, East Anglia and the Midlands.

It typically nests on flat, low-lying ground by water unlike the yellow-legged gull which mainly nests on cliffs in areas where the two overlap. The breeding season starts from early April. Two or three eggs are laid and incubated for 27 to 31 days.

They are scavengers and predators with a very varied diet. During the breeding season they often eat rodents such as ground squirrels, flying some distance into the steppes to find them.

This form has a troubled taxonomic history, summarised in the herring gull article. The Caspian gull used to be treated as a subspecies of the herring gull but it is now treated as a full species by many authorities (e.g. the British Ornithologists' Union Records Committee). Some authorities include the yellow-legged gull (L. michahellis) within L. cachinnans but it is now commonly considered to be a separate species.

The steppe gull or Baraba gull (L. (cachinnans) barabensis) may be regarded as a subspecies of the Caspian gull or as a separate species. It is also very similar genetically to its northern neighbour, the taimyrensis race of Heuglin's gull. The steppe gull breeds in Central Asia, particularly northern Kazakhstan. Its non-breeding range is still little-known but most are thought to winter in south-west Asia from the Persian Gulf to north-west India. There are possible records of this form from Hong Kong and South Korea.

The Mongolian gull (L. (vegae/cachinnans) mongolicus) may be classed as a subspecies of the Caspian gull, a subspecies of the East Siberian gull or as a species in its own right. It breeds in Mongolia and surrounding areas and migrates south-east in winter. 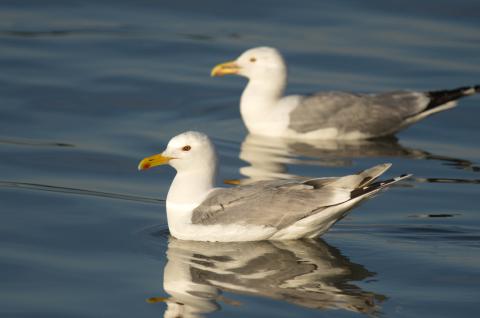