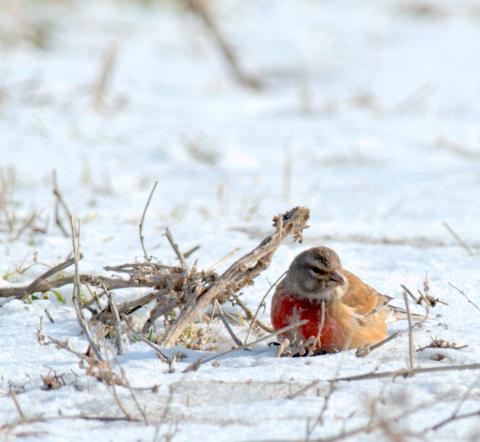 The Linnet (Carduelis cannabina) is a small passerine bird in the finch family Fringillidae.

The Linnet derives its scientific name from its fondness for hemp and its English name from its liking for seeds of flax, from which linen is made.

It is a slim bird with a long tail. The upperparts are brown, the throat is sullied white and the bill is grey. The summer male has a grey nape, red head patch and red breast.

Females and young birds lack the red and have white underparts with the breast streaked buff. The Linnet's pleasant song contains fast trills and twitters.

This bird breeds in Europe, western Asia and north Africa. It is partially resident, but many eastern and northern birds migrate further south in the breeding range or move to the coasts.

They are sometimes found several hundred miles at seat.

Open land with thick bushes is favoured for breeding, including heathland and garden. It builds its nest in a bush, laying 4-7 eggs.

This species can form large flocks outside the breeding season, sometimes mixed with other finches, such as Twite, on coasts and salt marshes. Its food mainly consists of seeds, which it also feeds to its chicks.

They feed on the ground, and low down in bushes.

They have a small component of Invertebrates in their diet.