The Black Woodpecker (Dryocopus martius) is a large woodpecker, 45–50 cm (18–20 in) long with a 64–84 cm (25–33 in) wingspan. Body weight is approximately 300-400 grams (10.6-14.2 oz) on average. It is easily the largest woodpecker in its range. This species is closely related to and fills the same ecological niche in Europe as the Pileated Woodpecker of North America.

It lives in mature forest across the northern palearctic. It is the sole representative of its genus in that region. Its range is expanding in Eurasia. It does not migrate. 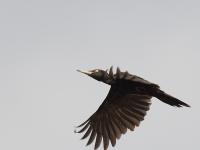 The plumage of this crow-sized woodpecker is entirely black apart from a red crown. In males, the entire crown is red, but in females only the top hindcrown is red with the rest of the body all black. It has a very long beak of 2.5 inches (6.3 cm).

The sexes differ even as nestlings.

The woodpecker feeds by using its bill to hammer on dead trees to dig out carpenter ants and wood-boring grubs. 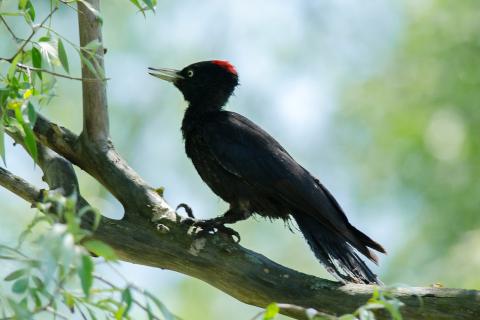 Their voice is remarkable in that it has two different calls. One is a short single high-pitched note done only twice in a row. The other is a screech-like shrill while in flight.

Unlike other woodpecker species, the Black Woodpecker does not have a dipping, bounding flight.

The woodpecker digs a nest hole, usually in a live poplar or pine treewhere it lays four or more eggs.