The Black-winged Stilt, Common Stilt, or Pied Stilt (Himantopus himantopus) is a widely distributed very long-legged wader in the avocet and stilt family (Recurvirostridae). Opinions differ as to whether the birds treated under the scientific name H. himantopus ought to be treated as a single species and if not, how many species to recognize. Most sources today accept 2–4 species.

Adults are 33–36 cm long. They have long pink legs, a long thin black bill and are blackish above and white below, with a white head and neck with a varying amount of black. Males have a black back, often with greenish gloss. Females' backs have a brown hue, contrasting with the black remiges. In the populations that have the top of the head normally white at least in winter, females tend to have less black on head and neck all year round, while males often have much black, particularly in summer. This difference is not clear-cut, however, and males usually get all-white heads in winter. 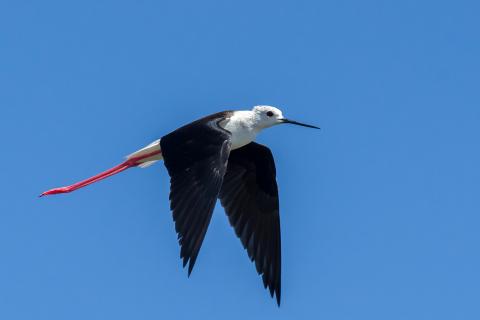 Immature birds are grey instead of black and have a markedly sandy hue on the wings, with light feather fringes appearing as a whitish line in flight.

The taxonomy of this bird is still somewhat contentious. Some believe that there are as many as five distinct species; others consider some or all of these to be subspecies. In addition, two dubious subspecies are also sometimes listed, but not as independent species.

In the most extensive circumscription, with one species and 5-7 subspecies, this bird is often called Common Stilt. The name Black-winged Stilt on the other hand can specifically refer to the Old World nominate subspecies. The commonly accepted taxa are:

W Europe and Mediterranean region to Central Asia, sub-Saharan Africa and Madagascar, South and Southeast Asia; localized breeder in East Asia (e.g. Taiwan) but more widespread during winter; has become a regular migrant to the Marianas and Saipan and sometimes is seen on other islands in western Micronesia (e.g. Koror, Ngeriungs Islet and Peleliu of Palau) since the late 20th-century.[7][8][9] NW populations migrate south to Africa in winter.
Head and neck vary from all-white to white with all-black cap and hindneck, usually with white band across upper back. Sometimes vestigial open black chest band.

South America from C Peru and N Chile to SE Brazil and south to SC Argentina. Intergrades with Black-necked Stilt in C Brazil.
Head and neck usually white with black hindneck and a black line from the nape to the eye. Usually has open black chest band and a white band across upper back. 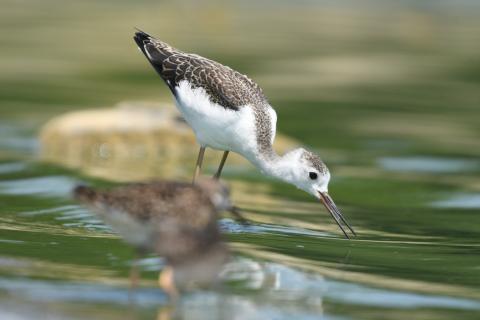 Head usually all-white, neck white, black behind and with open black chest band. Usually a white band across upper back.

Hawaiian Islands, where it is the only breeding shorebird
Generally similar to Black-necked Stilt, but black on head and neck more extensive, usually extending below the eye.

The breeding habitat of all these stilts is marshes, shallow lakes and ponds. Some populations are migratory and move to the ocean coasts in winter; those in warmer regions are generally resident or short-range vagrants. In Europe, the Black-winged Stilt is a regular spring overshoot vagrants north of its normal range, occasionally remaining to breed in northern European countries, for example in Britain in 1987.

These birds pick up their food from sand or water. They mainly eat insects and crustaceans.

The nest site is a bare spot on the ground near water. These birds often nest in small groups, sometimes with Avocets.

The Hawaiian population is endangered due to habitat loss and probably also introduced predators. The IUCN recognizes 3 species at present, merging the Hawaiian and South American birds with the Black-necked Stilt; consequently, none of the three is listed as threatened species. The Black-winged Stilt is one of the species to which the Agreement on the Conservation of African-Eurasian Migratory Waterbirds applies.