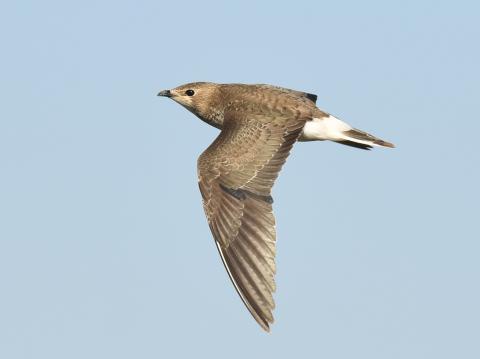 The black-winged pratincole (Glareola nordmanni) is a wader in the pratincole bird family, Glareolidae. The genus name is a diminutive of Latin glarea, "gravel", referring to a typical nesting habitat for pratincoles. The species name commemorates the Finnish-born zoologist and explorer Alexander von Nordmann.

An unusual feature of the pratincoles is that, although classed as waders, they typically hunt their insect prey on the wing like swallows, although they can also feed on the ground.

The black-winged pratincole is a bird of open country and is often seen near water in the evening, hawking for insects. This pratincole is found in warmer parts of south east Europe and south west Asia. Its 2–4 eggs are laid on the ground. It is migratory, wintering in tropical Africa, and is rare north or west of the breeding range.

It is 24–28 cm (9.4–11.0 in) long, with short legs, long pointed wings and a forked tail. It has a short bill, which is an adaptation to aerial feeding. The back and head are brown, and the wings are brown with black flight feathers. The belly is white and the underwings are black.

Although the dark underwing and lack of a white trailing edge to the wing are diagnostic, these features are not always readily seen in the field, especially as the chestnut underwing of the collared pratincole appears black unless excellent views are obtained.

The black-winged pratincole is one of the species to which the Agreement on the Conservation of African-Eurasian Migratory Waterbirds (AEWA) applies. 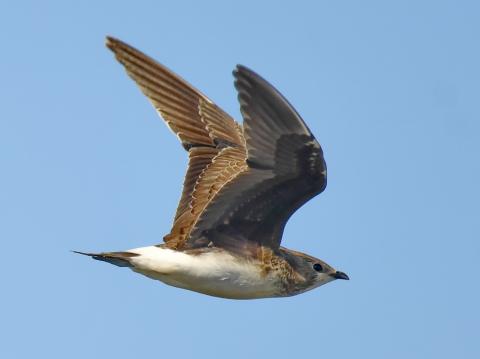