The Black-throated Loon (Gavia arctica) is a migratory aquatic bird found in the northern hemisphere. The species is known as an Arctic Loon in North America and the Black-throated Diver in Eurasia. Its current name is a compromise proposed by the International Ornithological Committee.

The Black-throated Loon was one of the many species originally described by Linnaeus in his 18th century work, Systema Naturae. The genus name Gavia comes from the Latin for "sea mew", as used by ancient Roman naturalist Pliny the Elder.

Breeding adults are 58 to 77 cm (23 to 30 in) in length with a 100 to 130 cm (39 to 51 in) wingspan, shaped like a smaller, sleeker version of the Great Northern Diver. Body mass is reportedly from 2–3.4 kg (4.4–7.5 lb). They have a grey head, black throat, white underparts and chequered black-and-white mantle. Non-breeding plumage is drabber with the chin and foreneck white. Its bill is grey or whitish and dagger-shaped. In all plumages a white flank patch distinguishes this species from all other divers including the otherwise almost identical Pacific Diver. 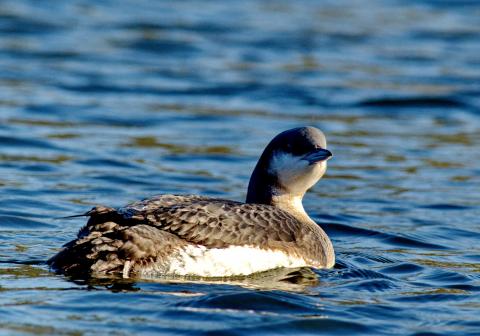 It breeds in Eurasia and occasionally in western Alaska. It winters at sea, as well as on large lakes over a much wider range.

It is a vagrant to Pakistan

This species, like all divers, is a specialist fish-eater, catching its prey underwater. It flies with neck outstretched. It feeds on fish, insects, crustaceans and amphibians.

The calls include a yodelling high-pitched wail and harsh growls, similar but lower pitched than Pacific Loon.

The Black-throated Diver is one of the species to which the Agreement on the Conservation of African-Eurasian Migratory Waterbirds (AEWA) applies.

Instructions for constructing and deploying artificial floating islands to provide Black-throated Divers with nesting opportunities are given in Hancock (2000).

On 6 September 2007, RSPB Scotland and the Scottish Natural Heritage (SNH) stated that it was surprised by an increase in the last 12 years in the breeding figures in the UK for the Red-throated Diver and the rarer Black-throated Diver of 16% and 34% respectively due to the anchoring of 58 man-made rafts in lochs. Both species decreased elsewhere in Europe.

The Black-throated Diver is the current school emblem of Achfary Primary School.

Dr Mark Eaton, RSPB scientist traced the drop in overall numbers to warming of the North Sea which reduced stocks of the fishon which they feed.