The Barred Warbler (Sylvia nisoria) is a typical warbler which breeds across temperate regions of central and eastern Europe and western and central Asia. This passerine bird is strongly migratory, and winters in tropical eastern Africa.

It is the largest Sylvia warbler, 15.5–17 cm in length and weighing 22–36 g, mainly grey above and whitish below. Adult males are dark grey above with white tips on the wing coverts and tail feathers, and heavily barred below. The female is similar but slightly paler and has only light barring. Young birds buffy grey-brown above, pale buff below, and have very little barring, with few obvious distinctive features; they can easily be confused with Garden Warblers, differing in the slight barring on the tail coverts and the pale fringes on the wing feathers, and their slightly larger size. The eye has a yellow iris in adults, dark in immatures; the bill is blackish with a paler base, and the legs stout, grey-brown. 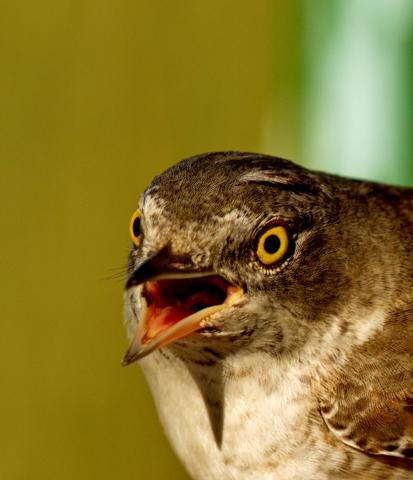 Within the genus Sylvia it is highly distinctive; the barred underside is shared only with the Cyprus Warbler, which has black barring and an entirely different overall colour pattern. The Barred Warbler seems to represent an ancient lineage of Sylvia warblers on its own and does not appear to have any particularly close relatives in the genus.

Two subspecies are recognised. The nominate Sylvia nisoria nisoria occurs over most of the species' range, while Sylvia nisoria merzbacheri occurs at eastern end of the range in central Asia. The latter is marginally paler and less heavily barred than the nominate subspecies, but they are barely distinct and intergrade where the ranges meet. Some authors consider them synonymous.

The Barred Warbler is a bird of open country with bushes for nesting, with very similar habitat preferences to the Red-backed Shrike. The nest is built in low shrub or brambles, and three to seven eggs are laid. Like most warblers, it is mainly insectivorous, but also takes berries and other soft fruit extensively in late summer and autumn. Its song is a pleasant chattering like a Garden Warbler with many clear notes, but is harsher and less melodious, and slightly higher pitched, with some resemblance to the Whitethroat's song.

The European population is estimated at around 460,000 pairs. It has declined in some areas, particularly at the western end of its breeding range in Denmark (where it is now extinct as a breeding bird) and Germany, due to habitat loss from agricultural intensification; conversely, some increase has occurred in Ukraine and southern Finland. Further east, numbers are currently stable. Population densities range between 1–20 pairs per 10 ha in Germany, up to 30 pairs per 10 ha recorded in Kazakhstan.

Barred Warblers are regular on autumn passage as far west as Great Britain (typically 100-200 records annually), where it occurs mainly on the east coast between late August and late October, and more rarely to Ireland(around 10–20 records annually); spring passage records in Britain are very rare (1–3 per decade). The vast majority of British and Irish records are of first-year birds, with adults occurring only exceptionally rarely.
In the Danube Delta we found the bird in spring time especialy near the Black Sea coast.